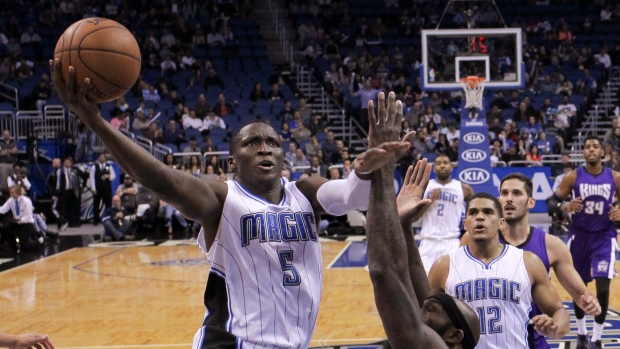 ORLANDO, Fla. - Close games haven't turned out well for the Orlando Magic over the past few weeks.

They're hoping their finish Friday night against the Sacramento Kings will start a new trend.

Channing Frye added 22 points and 10 rebounds, and Elfrid Payton had 10 points and 12 assists to help the Magic snap a four-game losing streak. It was Oladipo's second straight 30-point game.

Orlando lost its previous three games that were decided by single digits.

The Magic led by as many as 18 before the Kings rallied down the stretch. Sacramento briefly took two one-point leads, but Orlando was able to preserve the victory with some clutch 3s by Frye and Tobias Harris.

"We're learning how to close out games, how to win close games," Magic interim coach James Borrego said. "We saw some growth tonight. ... We trusted each other to move the ball, and that last play with Vic and Tobias was a reflection of the night.

What was even more impressive was that the Magic did it with five players out due to injury, including centre Nik Vucevic, who sat with a sore left ankle.

Rudy Gay led the Kings with 39 points — his third 30-point game of the season. DeMarcus Cousins added 29 points and 12 rebounds. The Kings have lost four of their last five. They still have five games left on their current eight-game road trip.

"The road is a hard place, an unfair place, a place where you might have been the better team in the second half, but you don't get rewarded," Sacramento coach George Karl said.

Orlando's lead was whittled down to six at the start of the fourth quarter.

That cushion quickly dissipated, though. Harris' 3-pointer was taken away by officials after a replay review during a timeout showed a shot clock violation. A 3-pointer by Sacramento's Andre Miller and three-point play by Gay put the Kings back in front 106-105.

The Magic nudged back in front 110-108, but Aaron Gordon ran into Omri Casspi on a 3-point attempt from the corner with 32.7 seconds left. He connected on all three free throws to put the Kings up back ahead by a point.

The Kings got the ball underneath to Cousins, but his layup rolled off the side of the rim and was rebounded by Gordon.

Gay quickly cut it back to one with a 3 from the corner, but Harris connected on four straight free throws to close the game.

"I think everybody was asked to do a lot more, especially with so many guys out," Frye said. "A lot of guys stepped up and just played ball the right way."

Friday marked the first time the Magic have had two players have points and assists double-doubles in the same game since Dec. 19, 2003, against Golden State. Tracy McGrady had 29 points and 12 assists and Rod Strickland (a current assistant coach at USF) had 11 points and 12 assists. It is the eighth time in team history it has occurred.

Kings: At Miami on Sunday night.