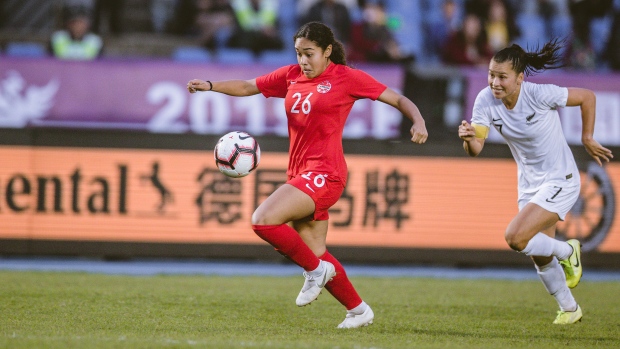 Six years ago, an 11-year-old Olivia Smith ran into Brazilian soccer star Marta at a hotel in Montreal during the 2015 FIFA Women’s World Cup. Overwhelmed with meeting one of her idols, Smith couldn’t speak, instead letting her dad do the talking for her.

Four years later, Smith earned her first cap for Canada’s women’s soccer team against Marta’s Brazil squad, becoming the youngest player to ever suit up for the women’s or men’s national team at the age of 15 years and 94 days.

“When I first got the phone call, I was kind of in shock. I didn't really believe what was being said to me. I had to process for a few seconds and I was ecstatic,” Smith told TSN. “I was honoured to finally represent the badge and make my dream come true. There's still a long way to go, but it's just the first steps to where I want to be.”

The native of Whitby, Ont., made two appearances for Canada at the China Four Nations tournament in November of 2019, also earning some minutes in a match against New Zealand. Although she has trained with the senior team intermittently since then, Smith, now 16, has yet to make another appearance.

Former head coach Kenneth Heiner-Møller gave Smith, a midfielder and forward, her historic first cap before Bev Priestman took over the role from Heiner-Møller in the fall of 2020. Priestman invited Smith to Canada’s camp for the SheBelieves Cup in February but did not name her to the final roster for the tournament.

“I wasn't surprised,” Smith said about being cut. “There were obviously some things I had to work on. I took it with consideration. I was a little disappointed, but I agreed with what [Priestman] had to say.”

“With Olivia, you see that she’s young.  I think that’s evident in the environment,” Priestman told TSN during the SheBelieves Cup. “But at the same time, she absolutely has the tools. I think that’s what stands out. She is a goal threat… She has a bright future.

“Is now right for Olivia? Can she perform at this level right now? But regardless, our investment in Olivia has to be with 2023 [World Cup] in mind, 2024 [Olympics] – look at the big picture.”

Priestman previously coached Smith at the youth levels. As a 12-year-old, Smith was brought into both the Canadian under-17 and under-15 camps led by Priestman in 2017.

According to Canada’s coach, Smith has all the tools and on-field skills necessary to be a mainstay on the Canadian roster down the road.

“Now it’s just these different exposures that are only going to help to add to her motivation, to her understanding of the game, and expose her to teammates who are going to put their arm around her and take her on this journey,” said Priestman.

Smith has been turning heads since she first got a ball at her feet at the age of three. She joined rep soccer in Whitby at six, regularly playing in age groups one or two years older than her. Smith played for clubs in Oshawa, Ajax, North Toronto and Markham before joining the Ontario REX program, designed to excel and develop the top youth players, where she still currently trains.

Brandon Frith, Smith’s coach at Ontario REX, said it didn’t take long for him to recognize Smith as a special player.

“I think you realize it within the first few sessions with her,” Frith told TSN. “Obviously on the field, but even off the field, her dedication to the game and studying the game and all of the habits that she's acquired through the different environments she's been in prior have laid a great foundation for her.”

Smith credits her family and specifically her parents, Sean and Sulee, for not only nurturing her love of the sport, but supporting her throughout her journey. Soccer is somewhat of a family tradition, with Sulee’s father playing semi-pro in Chile. Sean’s father also played in Jamaica, and Olivia’s younger sister, Maliyah, is following in her sibling’s footsteps, currently competing for the North Toronto Nitros.

Although her parents immediately recognized their eldest daughter’s talent, there was still plenty of shock when the Canadian senior team came calling for a 15-year-old Olivia.

“There was like a minute of silence” Sulee laughed, talking about the conference call from Canada Soccer.

“As a family, we were all very proud,” Sean said. “When you first heard it, we were kind of like, ‘Is this is real?’ But once it all sunk in, and we took it in, we knew it was happening… This was just written for her to be there, even at this young age.”

For Sean and Sulee, there were no reservations about their teenage daughter travelling to play in China, but there were still plenty of anxious moments. With no streams available for the match against Brazil, Sulee stayed up overnight, constantly refreshing her Twitter feed for any updates until she saw that Olivia was entering the match in the 86th minute.

“You can imagine being parents, your 15-year-old at the time is halfway across the world,” said Sean. “We're a very close-knit family, like all of us, from the grandparents, aunts, uncles, siblings – we’re there for everything. Olivia comes to her sister's practices, she’s at her practices. So for us not to be there when she stepped on the field for the first time, it was tough.”

Olivia’s first camp with Canada brought her into contact with two of her idols: the aforementioned Marta, and, of course, Christine Sinclair. When Smith was born in August of 2004, a 21-year-old Sinclair already had more than 60 caps to her name.

“It's honestly unbelievable, being at a camp with someone I looked up to at such a young age,” said Smith. “But it's amazing because she's taken me under her wing and there's nothing more I could ask for…. she kind of just showed me the ropes. I'd have breakfast with her and she just told me, ‘Just focus on yourself.’ I have something to bring in and they expect things of me.”

Smith also got to rub shoulders with teammates who share a similar story. Jessie Fleming and Jordyn Huitema both made their senior team debuts as 15-year-olds, and both have been hyped as “The Next Sinclair” for Canadian soccer.

While Smith has not spoken directly to them about their experiences dealing with lofty expectations, she said she isn’t worried about any extra pressure that comes with success at a young age.

“Honestly, I don't really pay attention to labels. I'm really any other person working hard…. I'm just trying to make my dream come true and it's just like something that I love doing,” she said.

Like Fleming and Huitema, who play for Chelsea and Paris Saint-Germain, respectively, Smith hopes to compete professionally one day in Europe, and cites Barcelona, who recently won the UEFA Women’s Champions League, as one of her favourite teams to watch.

It’s perhaps no surprise that Smith is drawn to Barcelona’s style of play. She describes herself as creative on the pitch, someone who loves to be on the ball and take on players one-on-one. Her coach agrees with her self-assessment.

“I think she's a very exciting 1v1 player, attacking threat,” said Frith. “I think she can be a major contributing factor for goals, which can be quite exciting.”

Before any professional aspirations, Smith has committed to the Florida State Seminoles, who were the runners-up in the College Cup this year and won the championship in 2018. In many ways, Smith is already prepared for life as a collegiate athlete. A typical weekday sees her in school until 2:45 p.m., training from 3 p.m. to 5:30 p.m., and then homework for the rest of the evening.

“It sometimes gets pretty difficult,” she admitted. “Sometimes there's a little overload with work.”

While Smith gets help from her teachers, tutors and parents as needed, her ability to handle her responsibilities does not go unnoticed.

“Obviously there's a time for fun, but she has these goals for herself, so she's very focused on achieving her goals,” said Frith. “Fantastic kid. I wish I was half of what she was at her age. I think I'd be much better with time management.”

While Smith may be out of the mix for the roster for this summer’s Tokyo Olympics, those around her agree that she will be in the Canadian red for years to come.

“She's a next gen player, and her time to arrive is really the 2024 Olympics,” said Frith. “I think for Olivia… every day is an opportunity to grow and become one per cent better. I think she actually really owns that. I think that's definitely on the field, but also off the field. I know she does a lot of work on her own. I know her family is a massive supporter, being there for her and making sure she has the resources she needs.

“But I also think a big thing for Olivia is that she also has a ton of fun. It's not super serious. She's not in a phase where it's going to be massive burnout, which I think you see with a lot of young players, a lot of pressures put on them. She has that internal motivation. It doesn't have to be placed on her.”

For Smith, there’s one other goal: next time, speak to Marta.

“I would definitely build up the courage to say something to her if I did end up getting called in,” she said with a smile.