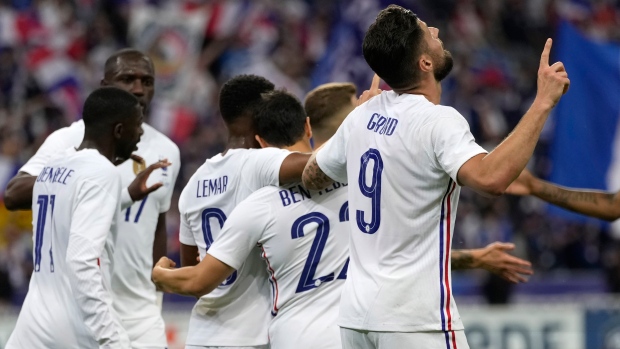 PARIS (AP) — Karim Benzema limped off injured late in the first half and his replacement Olivier Giroud scored twice as France completed its European Championship warmup with a 3-0 home win against Bulgaria on Tuesday.

Giroud hardly played for Chelsea this past season but remains effective for France. His brace moved him onto 46 goals for Les Bleus — just five behind former Arsenal great Thierry Henry’s national record of 51.

Antoine Griezmann scored the first with a slick overhead kick that took a slight deflection off a defender's head in the 29th minute and moved him onto 37 international goals.

Giroud turned in a cross from the right to the front post with a neat flick in the 83rd and was then set up by fellow substitute Wissam Ben Yedder for a close-range shot in the 90th.

“When I'm called upon, the most important thing is to do the job,” Giroud said.

He replaced Benzema shortly before halftime.

Benzema hurt his right leg around the knee area after rising for a header with Griezmann and clipping a Bulgaria defender's leg after losing balance on the way down.

The injury did not appear serious, with Benzema resuming and asking to be taken off and then sitting on the bench as he received a quick massage.

“It's a dead leg,” France coach Didier Deschamps said. “He took a blow to the muscle just above the right knee. We are not taking any risks and the medical staff is looking after him.”

Benzema was given a loud ovation from the fans at Stade de France and applauded them back as he trudged off.

Kylian Mbappe went close for France in an otherwise subdued second half in which Bulgaria could have equalized in the 79th, only to skewer a shot wide of the left post after breaking into the penalty area.

France opens its Euro 2020 campaign next Tuesday against Germany in Munich.

“We know what's awaiting us. Obviously we know it will be more difficult on the 15th,” Deschamps said. “There is only the reality of the competition.”