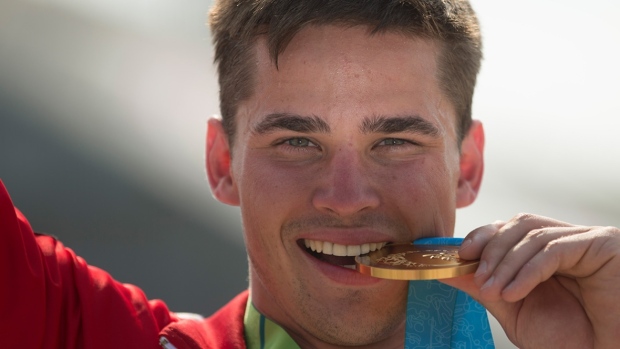 TORONTO — BMX racer Tory Nyhaug endured a string of broken bones and sacrificed his spleen for his sport.

But the 27-year-old from Coquitlam, B.C., could not survive a concussion, announcing his retirement Monday. The 2015 Pan American gold medallist has been struggling with a concussion sustained last year at the world championships in Baku, Azerbaijan.

"Since then it’s been difficult to recover as I've dealt with post-concussion symptoms flaring up for a year and a half while training and trying my best to return to racing." Nyhaug said in a social media post.

"I never thought it would take this long to recover, but I can now say I'm through it and happy and healthy. With that being said, because the post-concussion symptoms persisted for so long, the severity of it, and the possible long-term risk of another hit to the head, I have no choice but to retire for my own health."

BMX (from bicycle motocross) made its Olympic debut in 2008 at Beijing.

BMX bikes have only one gear and one brake, with 20-inch wheels that are about two-thirds the size of road bike wheels. It makes for some colourful action, with riders pumping their legs furiously and rocketing over bumps.

He almost didn't make the London Games, rupturing his spleen for the second time just 11 weeks earlier. After having the spleen removed, he missed out on the semifinals of the rough-and-tumble sport by a single point at the Games.

"Crashing is part of the sport," Nyhaug said in London. "It sucks when it happens, but that's the way it is."

He won a silver medal at the UCI World Championships in 2013, a breakthrough year that saw him make his first World Cup podiums — second in Manchester and Chula Vista — and reach the world championship final.

At Rio 2016, Nyhaug became the first Canadian male BMX rider to advance to the final. His fifth was a Canadian best.

The sport has been hard on his body. He estimates he has broken 15 to 20 bones. He won the Pan Am gold after suffering a badly broken left foot.

"I don't feel like BMX racing owes me a single thing," he said. "I went all in in this sport and was rewarded more than I thought I ever would be. I poured my heart, soul and every amount of effort I had into training/racing/ being a better athlete. I'm proud that I'm one of the few who got to race in an Olympic final, win a world championships silver medal, a Pan Am Games gold medal, and stand on many World Cup podiums around the world.

"I don't regret a thing. If I could do it all again I would 1,000 times over. The friendships I've made, the lessons I've learned, and the personal growth I challenged myself with I'll have forever. I've absolutely loved it."

He plans to continue to stay involved in our sport, coaching and doing TV work.

This report by The Canadian Press was first published Nov. 19, 2019.