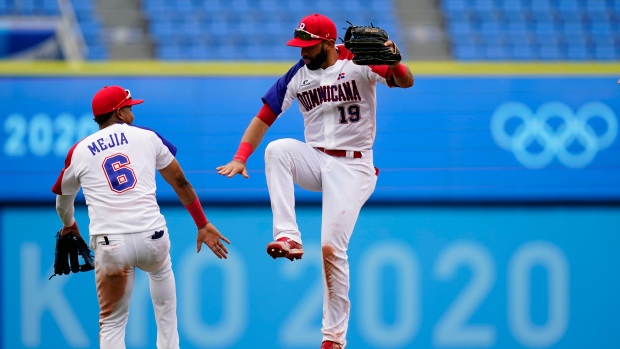 Juan Francisco homered to help give the Dominican Republic a four-run, first-inning lead, then hit a tie-breaking, two-run double off Seunghwan Oh of South Korea in a five-run eighth inning of a 10-6 victory Saturday that earned the Olympic baseball bronze medal.

Melky Cabrera had four hits for the Dominicans (3-3), who won a baseball medal for the first time.

Oh (2-1), a 39-year-old right-hander who pitched in Major League Baseball for St. Louis, Toronto and Colorado from 2016-19, blew a save for the second time in the tournament.

Francisco, a six-year big league veteran whose last major league at-bat was in 2014, had struck out in his three previous plate appearances and nine times overall. The 34-year-old doubled to the left-centre gap for an 8-6 lead, and Red Sox prospect Johan Mieses followed with a long two-run homer to left.

Francisco hit .208 (5 for 24) with two homers and five RBIs during the tournament, the last for baseball in the Olympics until at least 2028.

Cristopher Mercedes (1-0), who pitches for the Central League's Yomiuri Giants, threw 3 1/3 shutout innings through the eighth as the fourth reliever out of the Dominican bullpen.

Jumbo Diaz, four years removed from his last big league appearance, relieved with two on in the ninth and got three straight outs for the save.

Rodriguez, a 20-year-old at Double-A Arkansas, put the Dominicans ahead 2-0 on an afternoon of intermittent rain when he sent a 0-1 pitch well over the left field wall. Francisco drove the next pitch in the last row of the right-field seats for his second Olympic homer and a 3-0 lead.

Mieses walked, and that was it for South Korea starter Kim Min-woo, who allowed four runs, three hits and a walk in one-third of an inning. Charlie Valerio added a sacrifice fly.

Dominican starter Raul Valdes, a 43-year-old left-hander who was the oldest player in the tournament, gave up five runs and nine hits in four-plus innings. Valdes' last big league appearance was for Houston in 2014.

Rodriguez was hit on the right hand by a pitch from Park Se-Woong in the sixth but stayed in the game.

Jhan Marinez's first attempt to relieve was foiled when the bullpen cart started to the mound when he had just one leg on it, causing him to stumble. He got back on and walked his only batter.