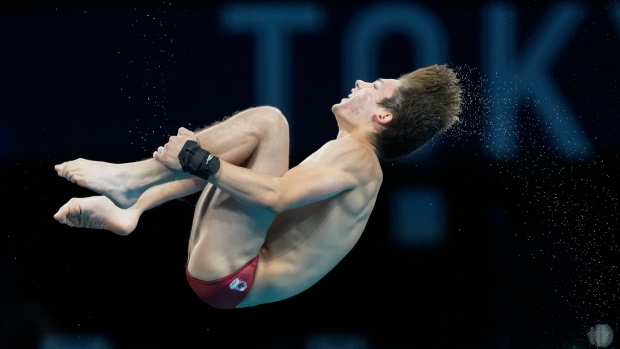 TOKYO — Still young and inexperienced on the international stage, diver Nathan Zsombor-Murray wants to turn the lessons learned from his Tokyo journey into success at the 2024 Paris Games.

The 18-year-old from Pointe-Claire, Que., failed to qualify for the men's 10-metre platform final Saturday, but his potential to one day challenge the sport's elite divers was nevertheless on display.

"I'm certainly disappointed, but I think I'm even more motivated for Paris and the next three years," said Zsombor-Murray after missing a place in the final by 2.55 points.

“Finishing 13th in the world at 18, I certainly have a few years ahead of me to get stronger physically and mentally.”

The Canadian's most important lesson learned in Tokyo: how to better manage his level of effort across a multi-day Olympic event.

Fifth after Friday's preliminary round, Zsombor-Murray started the semifinal well. He earned the best score in the first round of dives.

But his next dive let him down, a forward 4 1/2 somersaults in tuck position with a high degree of difficulty. He received just 49.95 from the judges, pushing him down into 17th place.

"That forced me to fight to get back to 12th and advance to the final," said Zsombor-Murray. "When you miss a dive, your confidence level decreases and it becomes more difficult to find the motivation to continue. Despite that, I was happy with my last three dives. I ended up on a high note, but it wasn't enough to make the final."

Digging himself out of that 17th position against some of the world's best divers proved too difficult. And the Canadian's choice of dives did not make things easier, either.

“My list (of dives) does not have a high degree of difficulty. My dives must therefore all be solid,” he said.

Canada's team of 10 divers ended the Tokyo Olympics with just one medal: Jennifer Abel and Mélissa Citrini-Beaulieu's bronze in the three-metre synchronized springboard.

It's the country's lowest medal total in diving since the 1996 Atlanta Games when Annie Pelletier won bronze in the three-metre springboard. At the time, however, synchro events were not on the Olympic program.

The top three divers in Saturday's semifinal were the same three to lead after the preliminary round the day before, with the two Chinese divers trading places. The 26-year-old Cao Yuan, gold medallist in Rio in the three-metre springboard, edged out teammate Yang Jian.

One of those two divers will attempt to win China's seventh gold medal out of eight diving events. The only title not won by a Chinese diver was the men's 10-metre synchro.