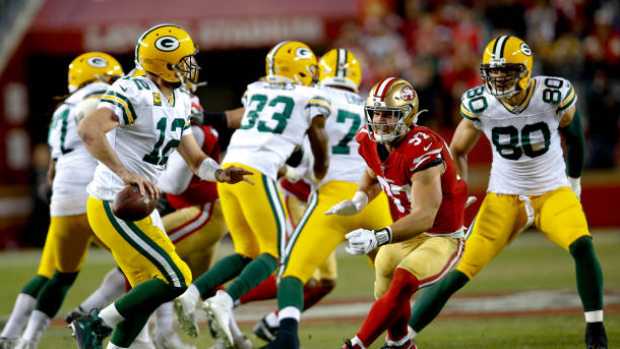 After a wild weekend of historic offensive performances by Derrick Henry and nearly every Kansas City Chiefs player, spiced by some timely defence from all the winners, we have the answers to the makeup of the NFL's Final Four.

Which brings along a whole lot of questions.

The NFC, following a wild-card weekend in which both wild cards won, settled down to top-seeded San Francisco and No. 2 Green Bay reaching the championship game. It's a classic rivalry that will resume next Sunday when the Niners (14-3) host the Packers (14-3).

“This is where it really gets fun. There's only four teams left, and we're one of them, and we've got a legitimate chance,” Packers quarterback Aaron Rodgers says.

It will be the eighth post-season meeting since 1995 for the Packers and Niners.

In the AFC, Tennessee has been the giant killer. The Titans rode the relentless running of Henry past the defending champion Patriots last weekend. On Saturday, they did in the league's best during the regular season, turning two Ravens turnovers and two fourth-and-1 stops into 28 points. That was more than enough as the defence kept All-Pro quarterback Lamar Jackson and the NFL's most prolific offence off-stride most of the night.

So here's what we're wondering:

Can a team that sneaked into the post-season on the final Sunday emulate the 2005 Steelers and 2010 Packers? Tennessee has that look right now.

The Titans fear no one, as they showed first in Foxborough, Massachusetts, and then in Baltimore. Their defence is versatile, physical and well coached. When they dominate in the trenches, they win, and the Titans have controlled the line of scrimmage in both road playoff victories.

And then there's Henry, the first player with two games of 175 rushing yards or more in the same post-season. He has set the post-season single-game rushing record for the Titans in consecutive weeks.

He also has the most yards rushing through his first four post-season games at 561.

And, get this, he threw a 3-yard touchdown jump pass at Baltimore — the first by a running back in the playoffs since 1987, when Allen Rice of Minnesota managed it.

So yes, these Titans could bring Music City its first NFL championship.

Kansas City's defence stepped up down the stretch, but it generally struggled against the Texans. The offence can do anything, but the special teams are uncertain.

Tennessee certainly can run the ball. Yet it's won with quarterback Ryan Tannehill basically being pedestrian, if you will, in the playoffs. And the pass rush must come alive.

Green Bay has a Hall of Fame-caliber quarterback, a spectacular receiver, do-it-all running back and steady enough line. It also has a dangerous pass rush. What it lacks is enough reliability in the secondary and, despite its gaudy record, an inability to put away opponents before things get uncomfortable.

So that leaves the Niners, whose biggest question mark entering the playoffs was QB Jimmy Garoppolo's lack of experience. We can scratch that worry. We also know this team can catch the ball, run it, pursue on defence, cover in the passing game and unnerve opposing passers. Give the nod here to the Niners.

CAN YOU DO IT ANDY?

Like Rodgers, Chiefs coach Andy Reid had a Hall of Fame-worthy resume. Unlike Rodgers, Reid has no Lombardi Trophy on his mantle.

Indeed, few coaches have been so successful in more than one location — Marty Schottenheimer and Dan Reeves come to mind — without owning a ring. Reid got to the 2005 Super Bowl, where his Eagles lost a close one to New England.

He's unquestionably the most accomplished of the four remaining coaches, though Tennessee's Mike Vrabel has three rings as a player. Reid, 12-14 in the post-season, has the kind of roster capable of going all the way. Can he guide it there?

Yes, Vrabel has the pedigree from his linebacker days, but he's now on the sideline overseeing matters.

So who has the background of achievement in the crucible that is a conference championship game?

Some players to look for to make the most critical plays next weekend:

— Richard Sherman. The 49ers cornerback was the anchor of Seattle's Legion of Boom and has had an exemplary second season in San Francisco.

— Rodgers. Can't ignore an all-time great who probably should have gotten to more Super Bowls than the one he won for the 2010 season.

— Logan Ryan. Tennessee's highly productive defensive back, a champion with the Patriots, seems to be in the right spots at key times.

— Travis Kelce. A second-team All-Pro in 2019 only because San Francisco's George Kittle had such a spectacular season, Kelce showed in the comeback against the Texans how dangerous he can be, especially on third downs or in the red zone.

Tune in next week.