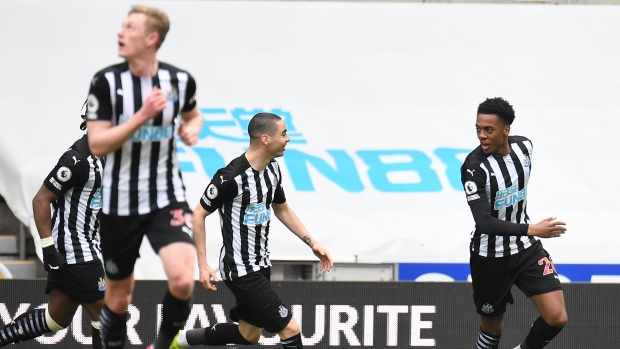 NEWCASTLE, England — Tottenham was denied a place in the Premier League’s top four by a player on loan from fierce rival Arsenal as Joe Willock’s late goal earned Newcastle a 2-2 draw on Sunday.

Harry Kane’s first-half double moved him back atop the Premier League’s scoring chart and saw Spurs rally from conceding the opening goal to Joelinton in the 28th.

Tottenham was on course to climb above London rival Chelsea and into the Champions League qualification positions when Willock, a 79th-minute substitute, smashed a close-range finish into the net off the crossbar six minutes later.

The midfielder joined Newcastle on loan until the end of the season from Arsenal on the final day of the winter transfer window.

“In defensive situations we create instability with our mistakes, and instability brings hope to our opponent, and our opponent didn’t give up,” said Tottenham manager Jose Mourinho, whose team has repeatedly dropped points by giving up late goals this season.

“I had the same feeling and I’m on the bench. It’s difficult to have the feeling of absolute control because I know that what happened can happen.”

Tottenham has failed to win a league-high six games when leading at halftime and dropped 11 points because of goals in the final 10 minutes of games.

It could be a crucial point for Newcastle, which came into the game in fourth-to-last place and looks to be engaged in a duel with Fulham over the final relegation place.

Newcastle is often criticized for its lack of adventure in attack, but had 22 shots in total — double the number Tottenham had.

“The way the players responded and played throughout — I thought we were the better team and had an edge and energy about us,” Newcastle manager Steve Bruce said.

Tottenham wouldn’t be nearly as high if it wasn’t for Kane, whose fortunate goal in the 30th minute — Emil Krafth’s clearance came off the striker and teed him up for a close-range finish — was followed by a thunderous, angled strike four minutes later.

The England striker jumped above Liverpool forward Mohamed Salah to 19 goals for the campaign.

Kane also leads the league in assists this season on 13 — two more than Manchester City’s Kevin De Bruyne — so is a big contender for English soccer’s player of the year award.

Fifth-place Tottenham is two points behind Chelsea and seven behind third-place Leicester, which also lost on Saturday.

“We had it in our hands," Tottenham midfielder Pierre-Emile Hojbjerg said. “We should win the game as well, so definitely not satisfied. The Premier League is too good and too fast to do one inch less.”