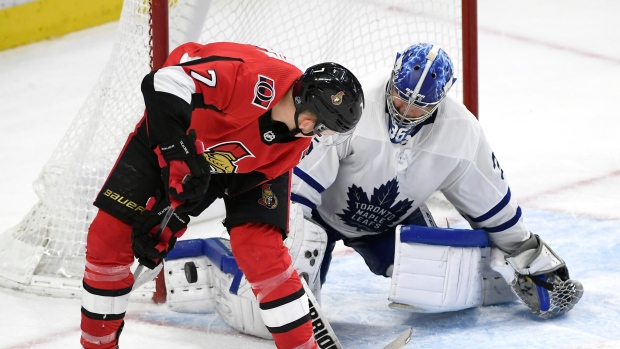 TORONTO — Ontario has given the green light for the Toronto Maple Leafs and Ottawa Senators to play home games this season, all but finalizing the NHL's plan for an all-Canadian division.

Lisa MacLeod, Ontario's sport minister, tweeted Thursday the province has granted permission for the Leafs and Senators to play at home during the COVID-19 pandemic.

MacLeod said the decision was made after meetings with Ontario's chief medical officer of health along with top public health officials in Toronto and Ottawa.

"This approval was granted after close scrutiny of the rigorous health and safety protocols that will be adopted to keep players, staff and our communities safe from the spread of COVID-19 while permitting Ontario's NHL teams to play the game we all love to watch," MacLeod wrote.

Manitoba is now the lone province not to grant final approval. However, acting deputy chief public health officer Dr. Jazz Atwal said Wednesday that Manitoba is "confident things will move ahead as planned" during the COVID-19 pandemic.

Quebec, B.C. and Alberta have already given their respective teams approval to play at home.

The season, which starts Jan. 13, features a new North Division that will see the seven Canadian franchises only play one another instead of crossing into the United States for games.

The league said on Dec. 24 it believed it was free to play in Canada after discussions with health authorities, but the provinces with NHL franchises needed to give their approval.

The federal government gave the start of training camps a thumbs up and also the waived the 14-day quarantine rule under "national interest grounds" in favour of a modified plan for players and team staff returning to the country.

The Canadiens will be able to play home games despite the Quebec government's curfew announced Wednesday that aims to curb the spread of COVID-19 in the province.

Premier Francois Legault confirmed the information at a press conference Wednesday evening after unveiling the new measures that will take effect Saturday and remain in place until at least Feb. 8.

“The people from the Canadiens have had long discussions with public health," Legault said, noting that there will be no fans at games, players and personnel will be tested daily and they are not allowed to visit other people when off the ice.

“I think Quebecers want ... to see hockey games," he said. "It's done completely safely, and they have the means to pay for that safety."

Montreal kicked off training camp at the Bell Sports Complex in Brossard, Que., on Sunday and are due to open their season next Wednesday against the Leafs in Toronto. After playing their first six contests on the road, their first home game at the Bell Centre is set for Jan. 28, against the Calgary Flames.