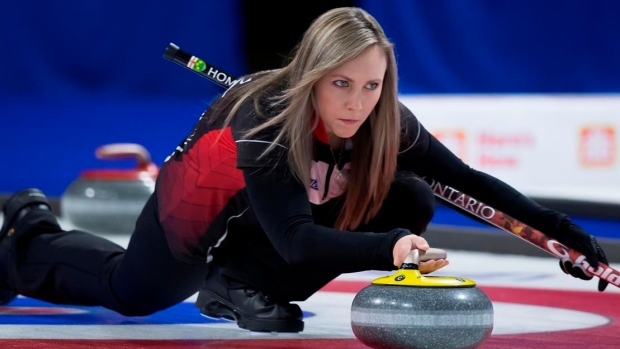 More star power was added to the national curling championships on Monday when Ontario and Manitoba cancelled provincial playdowns due to the pandemic and instead declared representatives to compete in the Calgary bubble later this season.

Both provinces followed the recent lead of the Northern Ontario Curling Association by turning to last season's playdown results to determine who would get invites.

For Ontario, that meant Rachel Homan got the nod for the Scotties Tournament of Hearts while fellow 2020 provincial champion John Epping was tapped for the Tim Hortons Brier.

Teams will compete in a hub setup at Markin MacPhail Centre. The Scotties is expected to kick things off around Feb. 19 with the Brier to follow in early March.

"We put a special place on the calendar for the Tankard and trying to represent Ontario at the Brier," Epping said from Toronto. "The Brier has so much history and tradition and it's still a big pinnacle in our sport."

Team Krysta Burns also confirmed she has accepted the Northern Ontario invite after Team Krista McCarville declined the offer due to travel restrictions, family and work commitments. Burns lost to McCarville in the 2020 provincial final.

"I think all of us were completely shocked," Burns said of the opportunity. "We had never even really considered it as a possibility. So when it came through, we were just like, 'OK, let's pinch ourselves here.'"

Brad Jacobs previously accepted the Northern Ontario invite to play at the Brier.

The Scotties and Brier will be followed by the Canadian mixed doubles championship, the world men's playdowns and two Grand Slam events at Canada Olympic Park.

"It will be a different Scotties for sure but we're so excited to be able to represent Ontario," Homan said from the Edmonton area. "We're thankful that we're able to go and represent and hopefully do Ontario proud."

Newfoundland and Labrador's Brad Gushue, who will return as Team Canada, is the other team that has locked up a Brier spot.

Fields are primarily filled with winners from provincial and territorial playdowns that are traditionally held in January and February. Many of those events remain on the calendar but more team declarations are expected to be made by other associations.

Curling Canada has yet to finalize many details for the national championships. The usual Friday night play-in games have been scrapped but the federation could still add one or more wild-card teams.

It also remains unclear if every province and territory will actually send teams to Calgary. Some curlers may not wish to travel or participate due to COVID-19 concerns.

Given the uncertainty, it's possible the federation could break from the usual 16-team formats. That could allow highly-ranked teams who are not reigning provincial champions to enter.

For example, Kevin Koe didn't play in the Alberta playdowns last season because he skipped Team Canada. The 2020 Brier wild-card game skips are in limbo, too.

All three teams remain in the top 10 of the Canadian rankings. Mike McEwen, who played as Team Wild Card last winter after beating Glenn Howard, is ranked fifth in the country. Koe is sixth and Howard is ninth.

In women's play, Tracy Fleury's Scotties status is uncertain despite being ranked second in Canada. Fleury dropped the 2020 wild-card game to Jones.

Saskatchewan offers another interesting case. It's unclear how a Scotties representative would be determined if those provincials were scrapped.

Nolan Thiessen, Curling Canada's broadcast, marketing, innovation and event presentation director, said nothing has been finalized but there are "lots of options on the table" as potential draw and format plans are discussed with the high-performance leadership team.

"The one thing we know is that we will be trying to safely deliver a Scotties and Brier of similar length and strength of competition that we always do," he said in an email.

Burns, meanwhile, finished third at the 2017 Canadian U21 junior championship. She also won a U Sports title with Laurentian University that year.

"Being (at the Scotties) and getting to represent where you're from, it makes the whole opportunity mean a lot more," Burns said from Sudbury, Ont. "I know it's going to be something we're never going to forget."

This report by The Canadian Press was first published Dec. 21, 2020.