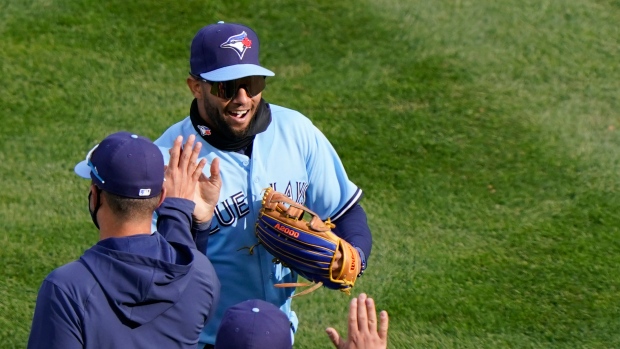 TORONTO — It’s only one game of 162 and the Toronto Blue Jays could be a .500 team by Saturday evening.

In other words, it’s a long season and outlining wins in April as “big” or “important” would be best described as reactionary and a touch sensational.

But this was one for the psyche.

An important ‘W’ for a young team trying to prove it should be taken seriously as a World Series contender and not just as a collection of exciting talent on the come up.

Great teams have a knack for emerging victorious in the close ones, doing the little things right — fundamentals were not this club’s strong suit in 2020 — and that’s exactly what the Jays were able to do as they kicked off a season with expectations as high as they’ve been in half a decade.
Beating Gerrit Cole is rare. For anyone.

His Houston swansong in 2019 saw the Astros go 26-7 in Cole starts, sending him towards a well-deserved, massive $324 million payday in free agency.

In his first season in pinstripes, the Yanks were 8-4 in his starts.

That means his team has a 76 per cent chance of winning on days Cole starts.

Earning $36 million this season alone, each of the Yankees ace’s starts is worth well over a million bucks.
Last year, Cole faced the Jays twice and beat them twice.

The combined score in those games?

Not good for the psyche to say the least. They erased those memories Thursday afternoon in front of 10,850 human fans. Disappointed ones.

No matter if it’s April 1 or September 1, a win is a win is a win and beating this Yankees team in a Cole start — a horse they’ll have to face in key divisional games for years to come — is a confidence-builder that can only help later on down the line.

It’s worth repeating: This one is all about the psyche.
But they only got two runs off him and Cole looked as dominant as ever with eight punch-outs over 5.1 innings, you say?

Pounding the big righty is never the expectation.

A couple timely hits — Teoscar Hernandez, who hasn’t stopped crushing baseballs since the summer of 2019 provided the big, game-tying homer in the sixth, a 437-foot shot off a hanging slider from Cole — execution on defence, and winning a close one is the only realistic calculation when facing a pitcher this good, and that’s what the Jays did.

The gloves did their part and the bullpen — even if the five free passes issued by relievers almost killed them — did theirs.

After a shortened 2020 season that was marked by miscues in the field led to an end-of-season promise from the front office to get better defensively, it’s another win for the psyche.

“Our defence was outstanding today,” said Charlie Montoyo, who earned his 100th win as Blue Jays manager. “It was good to see all the things we worked on in spring training carry over into the first game of the season. (Cavan) Biggio was great at third base. (Marcus) Semien with that nice play in the hole. Bo (Bichette) made nice plays at short and Vladdy (Guerrero Jr.) looked really good at first base picking the balls in the dirt. Every inning is high-leverage so you’ve got to play good defence against a good team like the Yankees and we did that today.”

On the opposite side of the pitching equation, everyone knows by now that the Blue Jays’ rotation is a huge question mark.

The Jays did that last year, going 9-3 when their ace took the ball, and it led them to a postseason berth.
It’s an easy equation for any team: You expect to win when your ace is on the bump.

While both aces did what was asked of them on this day, each pitching into the sixth inning and exiting with the ball game tied 2-2, it was the Jays clawing their way to a team win and finding a way with pristine fundamental baseball.

Armed with a potent offence, Montoyo’s message to his club to start the year is a simple one, and, for one day at least, the message has been received.

“I told our team, for us to win and get to the playoffs and do well during the season, it’s going to be pitching and defence.”