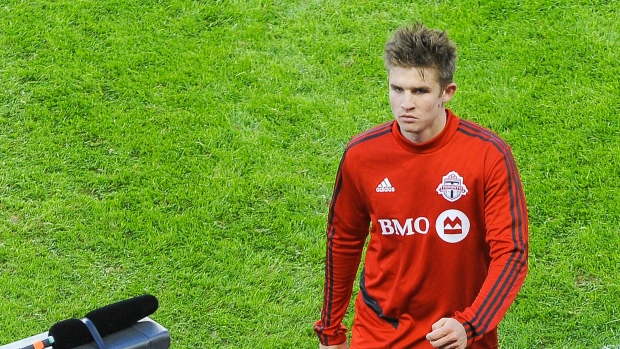 An injury is never just an injury in pro sports.

While a broken arm or concussion might sideline one competitor, it opens a previously closed door for another. Such is the brutal reality of sports that it never stops for one person. It goes on with somebody else stepping in. One person’s misfortune is inevitably somebody else’s opportunity.

So when Toronto FC announced last month that club captain and talisman Michael Bradley had undergone surgery on ligaments in his right ankle that would keep him out of action for up to four months, it created a chance for Liam Fraser to make his mark on the club.

With the season set to kick off on Saturday in San Jose with a date against the Earthquakes, the 22-year-old Canada international is ready for his close-up. But he’s not quite ready yet to lay claim to the captain’s spot in the midfield.

“I’ve had the mentality that nothing is set in stone yet,” the Toronto native told TSN.ca about his mindset headed into the 2020 season. “The position is not set in stone. The opportunity is not set in stone. Obviously, it’s up to [Reds head coach] Greg [Vanney] to give me that opportunity. So it’s going in with that mentality, working hard and making sure that everybody is trusting that when I have the ball, it’s going to the right place at the right time and that I’ll do my due diligence on the defensive side as well.”

Fraser is headed into his third season with the senior team after coming through the TFC Academy he joined in 2013 following his departure from the Vancouver Whitecaps Residency program. His experience through two pro seasons has been limited to just 23 appearances across all competitions, so the chance to play significant minutes on a team coming off of an appearance in the MLS Cup Final is a significant increase of responsibility for a young midfielder just coming into his own.

Vanney says it’s imperative that Fraser doesn’t try to be something he isn’t.

“The one thing I would say for him in terms of communication is to be bold enough to tell people what he needs them to do and move people in the right positions,” Vanney said. “Michael is good at getting guys into the right spots so that they’re prepared for the next thing and, collectively, we’re prepared. So it’s for him to continue to lead, but he just needs to be him. He doesn’t need to be Michael. He doesn’t need to be anything else. The group is strong and he’s got a lot of support and strength around him. So whether he’s the guy or we have other, different ways to do it, there shouldn’t be too much pressure on Liam that he has to fill the shoes of Michael. But this is an opportunity for him to take another step forward.”

Fraser believes that keeping grounded is the best way to ensure that the moment never gets too big for him.

“I’ve got great people around me,” Fraser said. “I’ve got a great support system and the team has definitely helped with that, as well. But it’s football. There’s no pressure because it’s what I love to do. It’s the one thing that makes me happy, so I trust myself. I trust my teammates around me to help me at this point, but like I said, it’s football. It’s what I’ve been doing my whole life so I know I can do the job.”

Despite the fact that the Reds came up just short of capturing their second MLS Cup in three seasons last year, Fraser sees no reason to dwell on the loss. Instead he’s embracing what the club’s improbable run to the final means going forward.

“There are a couple of ways to look at it,” Fraser said of the 3-1 loss to the Seattle Sounders in November. “You can look at it as a low note because you lost the final, but you can also look at the resilience the team showed to get to the final, despite certain results we had last season. To show that resilience was a massive part of what a lot of these players bring to the team and what the club is all about. It’s difficult to end the season like that, but we have that mentality where we want to finish the job and come back to that point and win it this year.”

And Fraser is setting his sights beyond MLS this year, as well. Receiving his first call-up from the CMNT in June’s memorable 2-0 win over the United States at BMO Field, Fraser’s first taste of international football at the senior level has only whetted his appetite for more.

Now capped four times, Fraser was named as Canada Soccer’s Men’s Player of the Month for January after appearing in all three of the CMNT’s January matches and adding an assist in a 4-1 win over Barbados on Jan. 10. Success for Fraser in 2020 is victory on all fronts.

“My goal is to win everything – to win the Canadian Championship, to win the Supporters’ Shield, to win the MLS Cup,” Fraser said. “And I’d love to represent Canada at the Olympics. I’d love to be with the team to get us qualified for the Hex and qualify for the World Cup.”

The first step in that journey for Fraser comes on Saturday in Northern California.