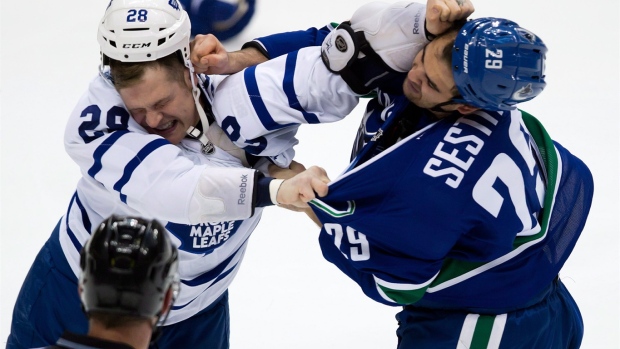 TORONTO - When the Toronto Maple Leafs open the regular season against the Montreal Canadiens, they will not have an enforcer on their roster.

Colton Orr and Frazer McLaren were placed on waivers Monday along with defenceman Korbinian Holzer for the purpose of assignment to the American Hockey League's Marlies, the team announced.

Rookie William Nylander was also reassigned. He later confirmed to reporters that he was heading back overseas to play in the Swedish Elite League.

Franson (bruised knee) and Leivo (bruised foot) left the ice and their availability for Wednesday night remained in doubt.

At forward, the Leafs look like they'll start the season with the same first line as last season: Bozak between James van Riemsdyk and Kessel.

The second line featured Nazem Kadri between Joffrey Lupul and Kozun, the third line Mike Santorelli between Leo Komarov and David Clarkson and the fourth line Peter Holland between Daniel Winnik and Frattin.