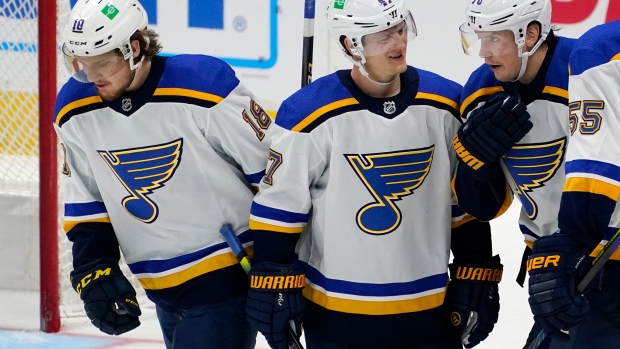 DENVER — Oskar Sundqvist scored twice and blocked four shots, Jordan Binnington made 26 saves and the St. Louis Blues beat the Colorado Avalanche 4-1 on Wednesday night in the season opener for both teams.

Jordan Kyrou also found the net after being recalled from the taxi squad, and new addition Kyle Clifford added another goal as the Blues scored four unanswered.

Andre Burakovsky scored early in the first period for the Avalanche, whose streak of season-opening wins was halted at four.

It was a surreal start to the season inside a mostly empty Ball Arena, where artificial noise was pumped in and on occasion would suddenly cut out. There were good-luck signs from fans lining the glass near the net before the game.

Binnington was brilliant all night, including a stop of Nathan MacKinnon's shot in the second period after the Colorado forward sped coast-to-coast, weaving through traffic.

Not only did Sundqvist score in the first and third, he also absorbed some bumps and bruises along the way. He briefly limped off after blocking a shot with his leg in the first period. He later got up slowly after crashing into the boards while trying to score.

Kyrou was recalled from the taxi squad Wednesday morning after making the trip with the team. His goal at 13:15 of the first gave the Blues a 2-1 lead. It was a nifty bit of passing that set up the score, too, as Kyrou sent the puck to Tyler Bozak, who sent it right back to Kyrou for the goal.

It was a rough start for Philipp Grubauer, who stopped 28 of 32 shots for Colorado.

The Avalanche and Vegas Golden Knights enter the season as favourites to win the West Division. But don’t discount the Blues — as they demonstrated.

“We’re fine being where we’re at,” coach Craig Berube said of the preseason hype. “We’ll go and show them on the ice. That’s all we can do.”

Before the game, the Avalanche held a ceremony and moment of silence to honour former general manager Pierre Lacroix, who died on Dec. 13 at 72. Lacroix was the driving force in turning the Avalanche into a power after the team relocated from Quebec to Denver for the 1995-96 season. The Avalanche won the Stanley Cup in ’96 and ’01 under his leadership.

Avalanche defenceman Erik Johnson recently tested positive for COVID-19. The team hopes he will be able to return Saturday.

Avs captain Gabriel Landeskog was pleased to see Blues forward Ryan O’Reilly promoted to the role of Blues captain this season. The two were once teammates on the Avalanche.

The Blues stay in Denver to play Colorado again on Friday.

“It kind of reminds us a bit of like the playoffs, when you go away to play those first two games of a series,” O’Reilly said.

Last season, the Avs and Blues split their four meetings, with the home team winning every matchup.