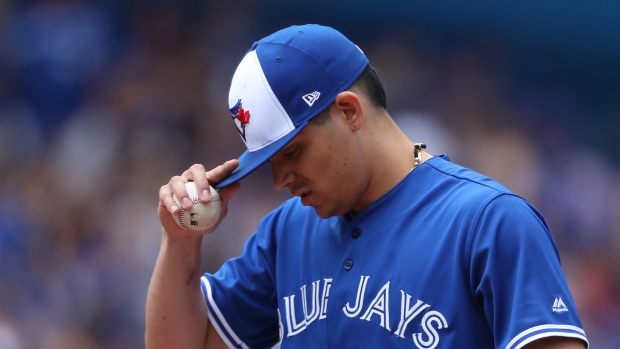 Toronto Blue Jays pitcher Roberto Osuna, who is charged with assault, had his case put over for three weeks at a brief court hearing Monday.

The 23-year-old closer was arrested in May in connection with what his lawyer, Domenic Basile, has called an alleged domestic incident.

Osuna intends to plead not guilty, Basile said outside the court.

"The Crown and I are continuing to have discussions," he added. "I'm hoping they will be productive."

Osuna is currently serving a 75-game unpaid suspension due to end in early August, but is eligible to begin playing in the Jays' minor-league system starting July 14.

Major League Baseball initially put Osuna on paid administrative leave after his May 8 arrest, renewing it on a week-to-week basis.

The league then imposed the 75-game suspension in late June, retroactive to the date of Osuna's arrest, saying in a press release he had violated its policy on domestic violence, sexual assault and child abuse.

Osuna, who appeared in 15 games for the Jays at the start of the season, decided not to appeal the suspension, Basile said.

"He accepted the (league's) penalty, however there's no admission of guilt," the lawyer said. "Roberto is eligible to play Aug. 5 and he is looking forward to coming back."

The Mexico native has been working out in Florida in preparation for his return to the mound, Basile said.