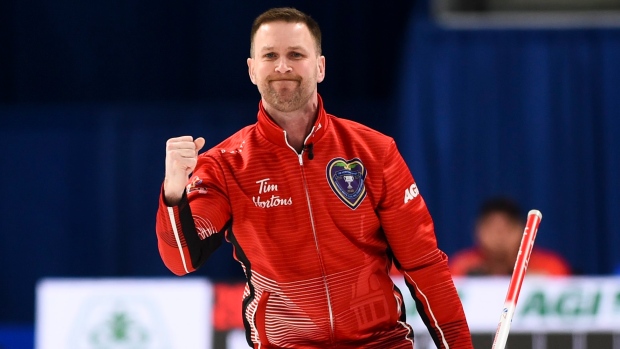 Banking on sport returning to some semblance of normal next year, Ottawa has been awarded the 2021 men's world curling championship by the World Curling Federation and Curling Canada.

This year's men's championship in Glasgow, Scotland, was cancelled this spring because of the COVID-19 pandemic, as was the women's championship and world mixed doubles in Prince George and Kelowna, B.C., respectively.

Indoor gatherings of thousands of people at sporting events or concerts are currently not allowed across Canada because of the virus. Arriving international travellers must quarantine for 14 days.

The 2021 men's championship April 3-11 at TD Place Arena will also serve as an Olympic qualifier. Six countries can stake a berth in the 2022 Winter Games in Beijing.

"By the time we get to Ottawa, we'll have hopefully hosted many events prior to this, so it will be tried and tested before we get to this huge event in Ottawa."

Ontario's government will contribute $350,000 to an event estimated to produce $3.6 million in economic spinoff for the Ottawa area, according to the provincial minister of heritage, sport, tourism and culture.

"We're all hopeful there will be a vaccine by that point in time or at the very least a very strong set of treatments," Lisa MacLeod said. "As it relates to fans in the stands, we're going to put public health first and foremost.

"We will continue to plan and make sure rigorous protocols are in place for sanitation as well as physical distancing if still required at that time."

Canada hosts either a men's or women's world championship annually under an arrangement between Curling Canada and the WCF.

The last men's championship in Canada was in 2019 in Lethbridge, Alta., where Sweden's Niklas Edin defeated the host team skipped by Kevin Koe in the final.

"Hosting the men's world curling championship next year is a big shot in the arm for the City of Ottawa because of course we've lost a lot of major events this year as a result of the pandemic," Ottawa mayor Jim Watson said.

Season of Champions events in 2021 such as the Tim Hortons Brier, Scotties Tournament of Hearts and world championship could operate without spectators, according to Curling Canada's chief executive officer.

Katherine Henderson is hopeful fans can be in the stands, however.

"Like everybody, we're tracking along and taking a look at what the public health outcomes are based on what our governments have been asking us to do," Henderson said. "We are starting to see some pretty significant openings up across the country.

"The numbers are going the right way. We are planning to have fans in the building, very safe fans that will likely have to go through a number of protocols in Ottawa and we're all planning to have a really good time."

The WCF will operate the men's world championship within guidelines set by local health authorities, the secretary-general said.

"All we can do is continue to listen to the professionals and work with them to ensure that we have as close to a normal experience in a world championship as possible," Colin Grahamslaw said.

"That includes fans in the stands, viewers on television and players playing at the top level."