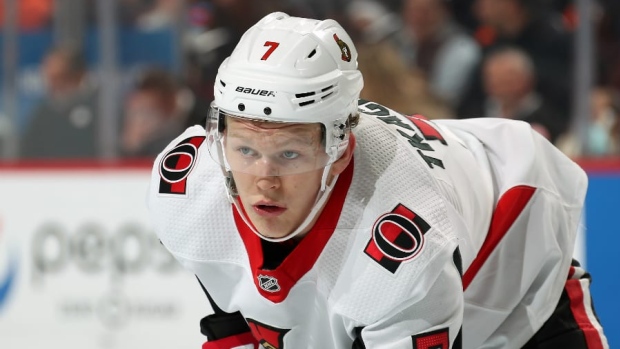 Ottawa Senators forward Brady Tkachuk is in the final year of this entry-level contract and is scheduled to become a restricted free-agent at season's end.

The 21-year-old was asked about his contract status following practice on Wednesday. Tkachuk said he loves playing in the nation's capital, but hasn't had many in depth conversations with management regarding his contract.

“That’s a good question,” said Tkachuk after practice on Wednesday. “I love it here. I love the people here, love the community. …Where the world’s at right now, we haven't really been talking about that, and we don't know how the salary cap is going to look for next couple years, and, honestly, I don't think that's the focus right now on both sides. Our only goal right now is to do what we can every single day and make playoffs.

“I love being here. I love the crew, love the teammates on the staff so definitely love it here, but we'll see how it unfolds.”

The American has one goal and two assists over three games in the young season. Tkachuk has tallied at least 21 goals and 44 points in each of his first two seasons in the NHL.

The Sens selected the left winger fourth overall in the 2018 NHL Entry Draft.