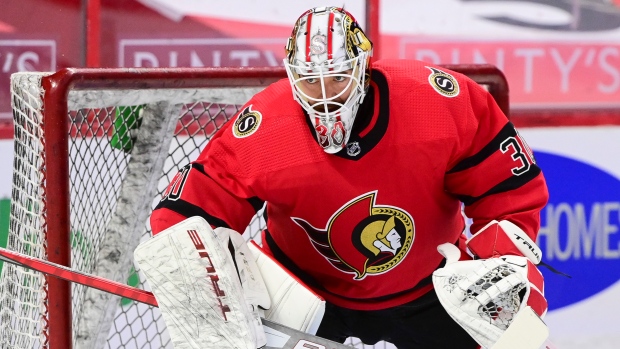 Over the weekend, the Ottawa Senators – spiraling in what is increasingly looking like a lost season – made a noteworthy move, placing goaltender Matt Murray on waivers.

The Senators acquired Murray 13 months ago, sending a second-round draft pick and prospect Jonathan Gruden to the Pittsburgh Penguins for the Canadian netminder. Murray checked a lot of boxes for the organization – he had already won a pair of Stanley Cups with the Penguins and at the age of 26, figured to have a lot more game in his tank.

But notably: the team bought low on Murray, whose game fell apart during the 2019-20 regular season. Pittsburgh didn’t have much of an answer for Murray’s struggles, but they saw enough to begin displacing some of his starts, turning their net over to Tristan Jarry. For Ottawa, it was an opportunity to bet on a player with some pedigree at a fraction of the cost – and, if all went well, the Senators could have security in their net as they transitioned out of a rebuild.

Good front offices are always looking for deals and discounts in the National Hockey League – aggressively-spending teams have to deal with the league’s hard-cap ceiling, and cost-conscious teams like Ottawa are always going to be particular about where their capital allocation goes. In the case of Ottawa and Murray, general manager Pierre Dorion bet Murray was the player we saw in the early stretches of his career, and that his future play would return to that baseline.

Ottawa would end up giving Murray 33 games before pulling the plug. In some ways, Murray appears to be the first casualty within the organization, the first player to shoulder responsibility for another dismal start. The Senators, for some reason, anticipated they would be competitive this year. And it’s clear they think goaltending is at the root of what ails them right now – considering the team’s stopping just 89 per cent of shots faced, it’s hard to blame them.

What happens with Murray long-term is anyone’s guess, but I want to go back to the decision made by Ottawa to bring Murray in last October. We know Murray’s save percentage was breaking down at the tail-end of his Pittsburgh career. We also know that Pittsburgh was quite strong defensively in Murray’s final season. And, of course, we know the young and rebuilding Senators are a poor defensive team.

Consider the below, which shows a distribution of single-game contributions by Goals Saved Above Expectations. Or, how much value a goaltender is providing based on the difficulty and volume of shots faced:

There are a few important takeaways from this. In no particular order:

I think the third point is critical. One of the risks is buying low on a player is that you are dismissing a genuine performance change. In small samples, this tends to be a reasonable bet. But over a four-year window in Pittsburgh, Murray was 23rd in all situations save percentage and 28th in all situations goals saved above expected. Now, consider the year-over-year trend: 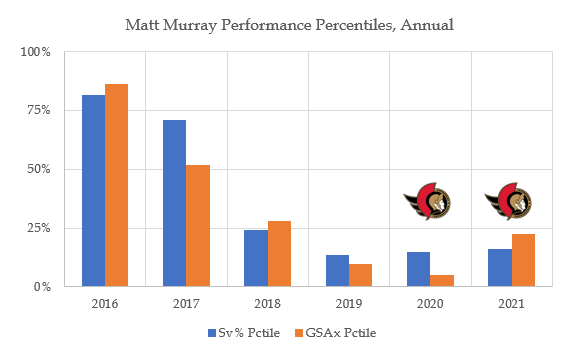 With the benefit of hindsight, what we see with Murray is the continuance of a multi-year trend – a player whose early-career success seems more of the outlier than anything we have seen in recent seasons, and that’s a big problem. Doubly so when you consider that Murray realized that early career success on Stanley Cup-calibre clubs. That’s a far cry from what he was playing behind at the tail-end of his Pittsburgh days, and in another galaxy to the defence he gets in Ottawa.

At some point, Ottawa had to move on – you simply cannot continue to play an under-performing goalie behind a young team that, at this point, is mentally fragile too.

But if I’m Ottawa, I’m taking a long and hard look at how this broke down and the thought process that went in to bringing in Murray on such a deal. Whether the warning signs were simply ignored or understood and part of the investment thesis matters not now – this was a failed experiment in net, the team doesn’t seem interested in trying to rehabilitate the player’s game further, and now will try to figure out how to handle the cap implications going forward.