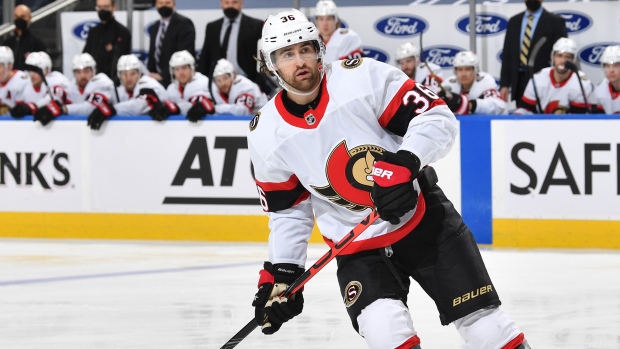 DJ Smith says they’re waiting for clearance from the Doctors, he’s “certainly closer” to being back. pic.twitter.com/jes4yO58Oy

White, 24, suffered a shoulder injury in the pre-season and has yet to return to game action.

Head coach D.J. Smith says the team is waiting for clearance from doctors and that White is "certainly closer" to being back.

Defenceman Lassi Thomson was recalled from the AHL's Belleville Senators to fill his spot on the roster.

Defenceman Lassi Thomson has been recalled from @BellevilleSens.

Brannstrom, 22, has one assist in nine games this season with the Senators.

Goaltender Akira Schmid was recalled from AHL Utica and will join the Devils Tuesday in time for their morning skate.

We have recalled G Akira Schmid from Utica (AHL). He will join the team for today’s morning skate. pic.twitter.com/QRX5ZgV8Qf

The Winnipeg Jets announced they have placed forward Dominic Toninato and assistant coach Charlie Huddy in the NHL's COVID-19 protocol.

TSN's Sara Orlesky reported later Tuesday there is a possibility that Toninato's test was a false positive. If further testing comes back negative, Toninato could be available to play Tuesday night when the Jets host the Panthers.

It’s possible that #NHLJets Dominic Toninato (who is in protocol) had a false positive. If his test today comes back negative he could be a player tonight. @TSN_Edge

Toninato, 27, has played 35 games for the Jets this season and has three goals and three assists.

The Vancouver Canucks have placed forward Tanner Pearson in the NHL's COVID-19 protocol.

The Vancouver Canucks announced today that forward Tanner Pearson has been placed into the NHL’s COVID-19 protocol.

Pearson, 29 has seven goals and 11 helpers in 41 games this season.

The Canucks are scheduled to host the Edmonton Oilers on Tuesday.

For clarification, Driedger has been cleared to return to the ice, isolation period done. Still needs to clear a set of physical benchmarks to get back into game action.

However, Driedger, 27, will have to work his way back into game action.

Joey Daccord will back up tonight. #SeaKraken

Philipp Grubauer will start in net for the Kraken on Tuesday against the Nashville Predators.