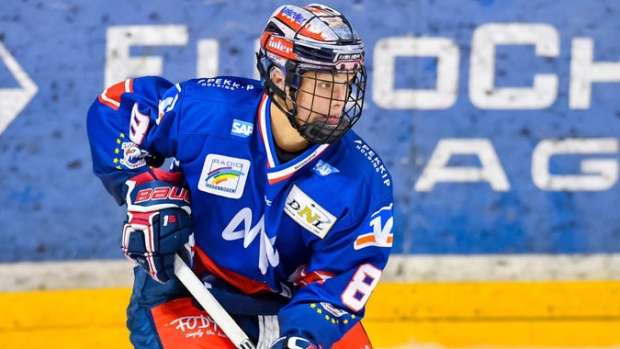 MANNHEIM, Germany — Ottawa Senators prospect Tim Stuetzle is set to undergo surgery after suffering a broken arm while training with his German club.

The Mannheim Eagles made the announcement Tuesday before the Senators provided more details in a statement.

"In consultation with doctors in Germany and with our own medical staff, it has been determined that Tim requires a surgical procedure to stabilize a fracture," Ottawa general manager Pierre Dorion said. "The procedure is scheduled to take place in Germany later this week and has an expected recovery time of six-to-eight weeks.

"Our medical staff will remain in regular contact with Tim and his doctors as he begins his recovery through to the point that he is medically cleared."

Mannheim said the forward, who was selected third overall by Ottawa at last week's NHL draft, was hurt Monday. It's unclear if the injury occurred on or off the ice.

Stuetzle had seven goals and 34 points in 41 games with Mannheim in 2019-20 in his country's top professional league, which ranked him seventh on the team despite being the Deutsche Eishockey Liga's youngest full-time player. He added five assists in five games at the world junior hockey championship in the Czech Republic.

The six-foot-one, 187-pound winger, who can also play down the middle, was one of three first-round picks made by the rebuilding Senators in the pandemic-delayed 2020 draft. Ottawa selected defenceman Jake Sanderson at No. 5 and centre Ridly Greig at No. 28.

The NHL is aiming to start next season on Jan. 1, which should give Stuetzle enough recovery time ahead of training camp.