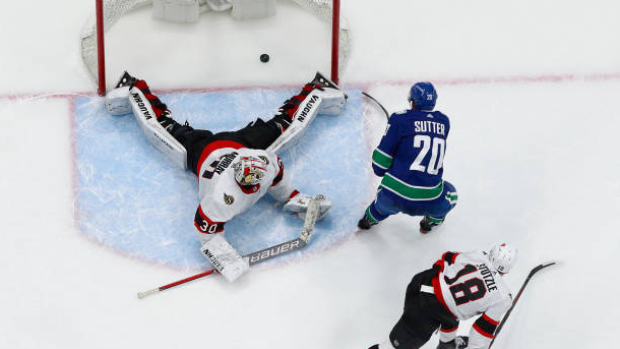 It appears changes could be coming to the Ottawa Senators lineup after a 7-1 loss to the Vancouver Canucks on Monday night.

The Senators, who dropped to 1-4-1 on the early season, are winless since defeating the Toronto Maple Leafs in their opening game on Jan. 15 and have been outscored 17-5 over their past three games.

"We got some guys that maybe are taking for granted positions in the National Hockey League," Senators head coach D.J. Smith said. "We've got to find the right combination and we've got to give some other guys opportunity to see if they want to play a little harder than some of the guys that are playing now."

Smith added that he considered pulling Matt Murray after the second period for a second straight start, but elected to keep the off-season addition in net. Murray allowed seven goals on 35 shots, including three on 14 shots in the third period.

"Certainly he didn't have a very good game, but he's got to work through it and find a way to battle for us there," Smith said of Murray. "He's no different than any other player and he's got to find his groove here."

The Senators, who sit last in the North Division with three points, will face the Canucks again on Wednesday and Thursday before heading to Edmonton to continue their current road trip.