Smith on B. Tkachuk: 'When he gets here, I'll coach him'

The Brady Tkachuk saga has reached the regular season. That’s bad news for the Ottawa Senators.

For months, there has been ample debate as to where the restricted free agent’s contract will land. Tkachuk’s camp appears dug into the trenches of a shorter-term bridge deal, whereas the Ottawa front office wants to lock Tkachuk into a long-term deal.

Why does Tkachuk want a short-term deal? There are likely two answers: he believes he can capitalize on future salary cap growth and earn more money over the course of his career by signing short, and perhaps he has some skepticism about Ottawa’s ability to deliver a contender.

The Senators, meanwhile, have sold the success of this rebuild through the eyes of Tkachuk, and for the time being have refused to consider shorter-term deals for the 23-year-old winger.

We could spend weeks on the contractual stalemate and how it may play out. What I’m more curious about, at least in the short term, is what this Senators team looks like without Tkachuk in the lineup.

This was intended to be a pivotal season, the first of a five-year run where the Senators would spend close to the salary cap and deliver an annual contender. The spending isn’t there, but some of the younger players have arrived, and there is a hint of optimism surrounding the team.

Even assuming some of Ottawa’s younger players take positive steps forward this year, it’s hard to imagine (putting a sharp change in goaltending performance aside for the moment) how the team improves with Tkachuk unavailable. I suspect Tkachuk’s camp knows this to some degree.

If we look at last year as one example, the Senators were a materially different team with Tkachuk on the ice versus off. I’ll use expected goals, because Ottawa’s goaltending was a wreck. 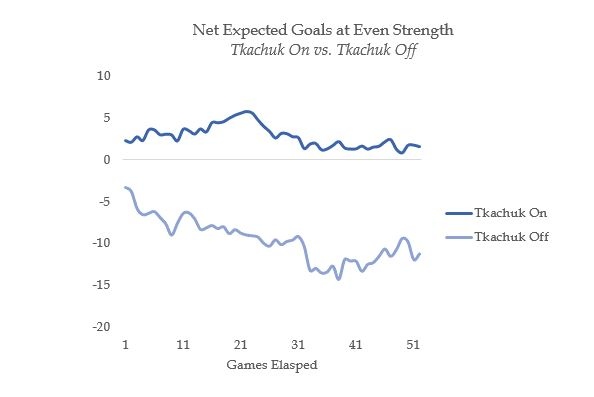 Most teams see better results with their top-six forwards on the ice for the obvious reasons. It’s the same situation in Ottawa, where the Tkachuk line was emphatically better than the rest of the skating group. Tkachuk ended up being 11 goals in the red on the season, with Ottawa full-up at -26. Again, a good piece of that was goaltending.

What else do we know about Tkachuk? He improves the play of his teammates. The Senators can do a lot with Tkachuk on the ice, if for no other reason than his sheer tenacity and ability to position himself in the most dangerous scoring areas of the ice – in and around the net-front area.

Last season, Tkachuk played most of his minutes with key pieces of the Ottawa rebuild: Josh Norris, Drake Batherson, and Connor Brown were three forwards who saw regular minutes with him.

If we look at the splits of those players along with the most common defensive pairing behind him (Thomas Chabot and Nikita Zaitsev), we see that all five of these skaters saw performance slips when not playing with Tkachuk:

I attribute some of those performance slips of Tkachuk’s teammates to the fact that he is a force of a player, as well as the top-heaviness of this roster as it continues to transition.

But it is interesting that Tkachuk, when pulled away from players like Norris and Batherson, sees his performance sustain itself. That’s what we tend to see around the league from true play-drivers – the type of forwards who can produce with players of different skill sets, and can be seamlessly moved around the lineup.

Tkachuk’s contract will sort itself out. But if it doesn’t before the regular season begins, keep an eye on the other top-tier players in Ottawa’s lineup. Absent a big step forward from Ottawa’s young players, I suspect this group may struggle to find their game early. And I’m not sure this Senators team can afford another slow start.