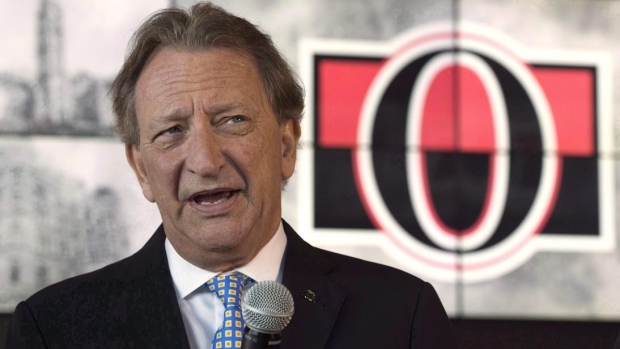 Ottawa Senators owner Eugene Melnyk has filed a defamation lawsuit against an Ottawa Sun columnist alleging that stories published by the tabloid in June suggested Melnyk was dishonest, was trying to divert money to his own charity for his own benefit, and had been “gouging” the Ottawa Senators Foundation by charging exorbitant rent.

In a statement of claim filed Sept. 4 in Ontario Superior Court in Toronto, Melnyk alleges that Ottawa Sun columnist Rick Gibbons’ articles about Melnyk’s dealings with the foundation had damaged his reputation. The Sens owner is seeking at least $500,000 in damages.

Gibbons declined to discuss the lawsuit. The Sun, which is not named as a defendant in the case, published a full apology and correction to Melnyk after Gibbons’ stories were published.

Melnyk’s lawyer, Robert Brush, wrote in an email to TSN that the statement of claim has not yet been served on Gibbons.

"The position of Capital Sports & Entertainment, The Organ Project and Mr. Melnyk is set out in the statement of claim and they do not intend to comment outside of that proceeding," Brush wrote in the Oct. 13 email.

Melnyk’s claims have not been proven and Gibbons has not filed a statement of defence.

The Ottawa Senators Foundation was founded as an independent charity and was not controlled by the NHL team, Melnyk’s claim says.

In early 2020, the Senators discussed with the foundation the possibility of it expanding to help support charitable aims, including women’s charities and organ donor awareness. Melnyk had launched another charity called The Organ Project in 2016 after undergoing a successful liver transplant that followed a public appeal for a living donor.

After the foundation refused to consider Melnyk’s requests, the NHL team advised the foundation that it would begin to receive bids from other charities to license the team’s name and other intellectual properties.

On June 5, the foundation decided not to take part in the bidding process and began to cut ties to the NHL team. It has since rebranded itself as the Ottawa-Gatineau Youth Foundation.

In a story published the same day in The Sun, Gibbons wrote, “the team’s owner wants a good portion of the money directed to other initiatives, including his own pet project – organ donation awareness.”

Gibbons wrote that the Senators charged the foundation hundreds of thousands of dollars per year for rent and reported that a 2018 study by Charity Intelligence Canada had found the foundation used less than half the money it collected on charitable projects.

On June 11, the Sun published an apology and a correction for errors in Gibbons’ stories, saying, among other things, that the newspaper did not intend to suggest that Melnyk had exerted improper influence over the Ottawa Senators Foundation. The Sun also admitted it did not contact Melnyk or the Senators for comment before publishing Gibbons’ columns.

“Mr. Melnyk is a prominent Canadian businessman and public figure who engages with government agencies, the NHL, the private sector, and the Canadian public,” Melnyk’s claim says. “The defamatory articles and their broad distribution, including being made available to the world at large on the internet, were damaging to Mr. Melnyk’s reputation.”