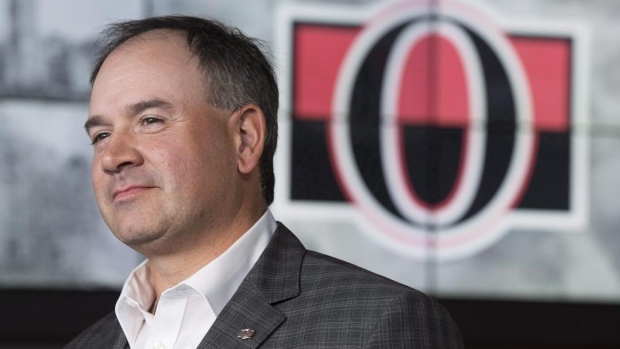 The Ottawa Senators are hopeful that their multi-year rebuild is coming to an end.

Speaking with TSN Hockey Insider Pierre LeBrun in an interview for The Athletic, Sens’ general manager Pierre Dorion said that the team has moved past the early “fire sale” phase of the rebuild.

“We’re definitely hoping this is our last deadline as a seller,’’ Dorion said. “I think the need to sell is definitely diminishing. We did want to get a few players in this year, and we knew some of them would only be around for a year and some we’ll try to sign.

“But there’s no real need to be selling at a premium compared to previous years.’’

The Senators have a promising young core to build around, anchored by captain Brady Tkachuk, defenceman Thomas Chabot, and forward Drake Batherson, who was scoring at a point-per-game pace before sustaining a high ankle sprain in late January.

With the team’s foundation in place, Dorion sees an opportunity at the trade deadline to move out some of the club’s pending unrestricted free agents while also making “hockey deals” to build around the Sens’ young players.

“In a perfect world, you’d like to use the trade deadline to set up your team for next year,’’ said Dorion. “But the focus on what’s happening at the deadline is that [playoff] teams are trying to build their roster to have the best playoff run possible.

“Obviously, we would like to make hockey deals. Maybe a hockey deal is made between two teams that aren’t gunning for it this year.’’

The Senators currently sit sixth in the Atlantic Division with an 18-25-4 record and are on pace to make a top-10 selection for the third time in the past four drafts. Dorion is happy with the team’s current crop of prospects but remains hesitant to part with his first-round pick unless the right deal comes along.

“Our scouting staff has done a great job over the last years of taking good players in the top 10,” said Dorion. “I just started going out after our amateur meetings to see some of the top prospects and I’ve been quite impressed.

“So, it would have to be a significant hockey deal for us to move our first-rounder.’’

The Senators have several pending UFA’s that could be on the trade block at next month’s trade deadline, including forwards Nick Paul, Chris Tierney, Zach Sanford, Tyler Ennis, plus defenceman Josh Brown and goaltender Anton Forsberg.

While conventional wisdom says that a rebuilding team should move all pending UFAs for picks, Dorion stressed the need for balance between stockpiling picks and ensuring that the team’s prospects are ready to contribute before making the jump from the AHL to the NHL.

“We’re not in a place where we need the picks. Obviously, we’re always going to do what’s best for the organization and move players out if we feel they’re not going to be part of the long-term process.’’

Dorion also added that the team would like to bring some of its veterans back but needs to make room for some of the blue-chip prospects rising through the organizational ranks, including defenceman Jake Sanderson, who played for Team USA at the Beijing Olympics before being sidelined by an upper-body injury.

“We do have some blue-chip prospects that will be able to step in as soon as next year. We also have to make sure we have room for them,” said Dorion.

“I don’t really want to talk about the injury. We hope he can finish the season at North Dakota,” Dorion said of Sanderson. “The plan all along was for him to hopefully bring North Dakota to a championship this year and join us after that.’’