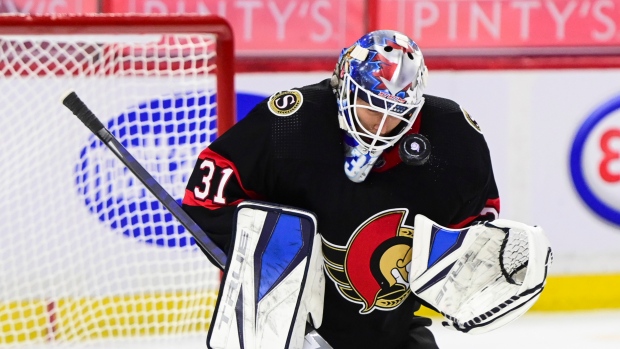 The Ottawa Senators have signed goaltender Anton Forsberg to a one-year, $900,000 contract extension.

The 28-year-old is 2-3-1 in six appearances this season with the Senators, posting a .910 save percentage and a 3.18 goals-against average. He was claimed off waivers from the Winnipeg Jets on March 17.

Forsberg was originally drafted in the seventh round (188th overall) of the 2011 NHL Draft by the Columbus Blue Jackets.

In 54 career NHL games, he has a record of 14-28-5 with a .902 save percentage and a 3.21 GAA split between the Blue Jackets, Chicago Blackhawks, Carolina Hurricanes and Senators.

"Anton's addition has been a steadying one for us this season," said Senators general manager Pierre Dorion. "He possesses a calm and controlled playing style, has good size and ability, is a tireless worker with good habits and is a good teammate. He's worked hard in practice to earn his playing opportunities and this contract extension."