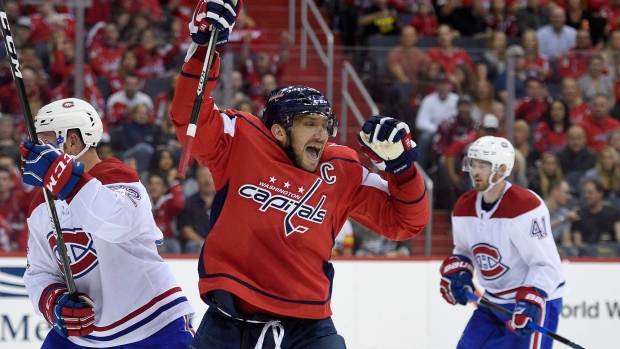 NEW YORK — Alex Ovechkin of the Washington Capitals was named the NHL's first star on Monday for the week ending on Oct. 8, while Vegas goalie Marc-Andre Fleury and Philadelphia right-winger Wayne Simmonds were also honoured.

Ovechkin led for the NHL in goals and points as the Capitals opened the season with two victories. On Oct. 5, Ovechkin had his 18th career hat trick in a 5-4 shootout victory over the Ottawa Senators. Two nights later he matched a career high by scoring four times in a 6-1 win over the Montreal Canadiens.

He's fourth player in NHL history and first since 1917-18 to record hat tricks in each of his team's first two games of a season.

Fleury earned second star honours when he went 2-0-0 with a 0.98 goals-against average and a .973 save percentage as the Golden Knights opened the season with two victories.

Simmonds was named third star with four goals — including two game-winners — as the Flyers began the season with two victories in three starts on the road.