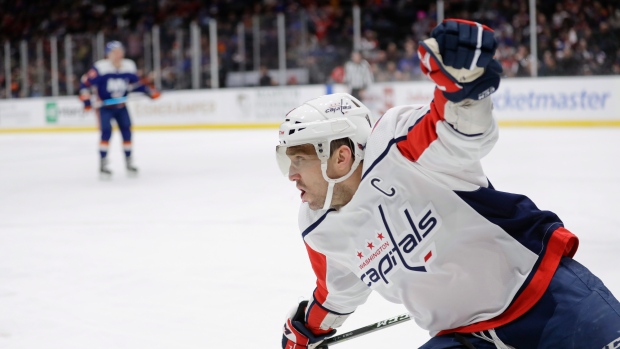 UNIONDALE, N.Y. — Alex Ovechkin scored three goals to tie Steve Yzerman for ninth on the career goals list Saturday, and the Washington Capitals rallied with five goals in the third period for a 6-4 victory over the New York Islanders.

Jakub Vrana scored the go-ahead goal with 2:30 left after the Islanders turned over the puck in their own zone. The Capitals extended their wining streak to four games while the Islanders lost for the fourth time in their last five games.

Ovechkin also passed Mario Lemieux for 10th place on the career list. His 692nd goal came late in the third period on an empty net to seal the victory. Washington's Ilya Samsonov made seven saves in relief of Braden Holtby, who allowed four goals on 22 shots.

Ovechkin's 690th goal came at 10:22 of the first period to put Washington up 1-0. His 691st goal came at 5:18 of the third to cut the deficit to 4-3 after Carl Hagelin scored earlier in the third for Washington.

Nelson made it 1-1 with his team-leading 19th goal at 13:11 of the first. The Islanders took the puck away along the boards, which allowed Anthony Beauvillier to feed Nelson in the high slot. Beauvillier’s assist on the play extended his point streak to three games.

Cizikas gave the Islanders a 2-1 lead at 15:49 of the first and Eberle padded it at 9:31 with his fourth goal in his last six games. The goal came on the power play, the first power-play goal Washington had surrendered since Jan. 5 against San Jose.

Toews put the Islanders up by four at 17:25 of the second.

NOTES: Nicklas Backstrom has 11 points (one goal, 10 assists) in his last 11 games with Washington. … Anthony Beauvillier has a point in four straight games against the Capitals dating back to last season. Beauvillier had a two-game goal streak snapped as well. … This was the Capitals' final game before an eight-day break. The Islanders are 11-6-1 when playing at the Nassau Coliseum this season. … The Islanders scratched F Michael Dal Colle and D Sebastian Aho. … F Travis Boyd was scratched for Washington.

Capitals: Off until Jan. 27 at Montreal.

Islanders: Play at Carolina on Sunday.