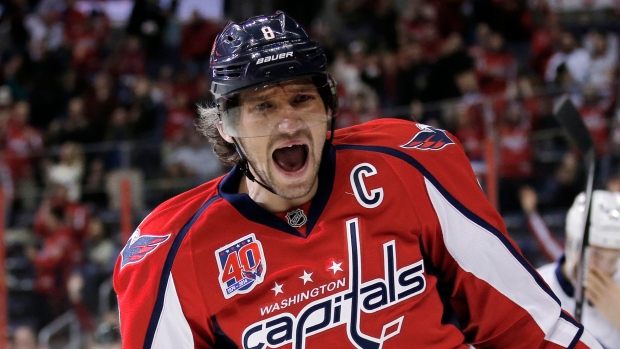 His celebration after his first goal, however, was not.

Ovechkin scored his 40th and 41st goals of the season and added an assist, Braden Holtby made 32 saves, and the Capitals defeated the Toronto Maple Leafs 4-0, snapping a three-game losing streak.

Ovechkin struck just 33 seconds into the game, then did his celebratory jump into the boards and promptly fell, but was laughing as his teammates arrived to congratulate him.

"I think a sniper was up there," Ovechkin joked after surpassing the 40-goal plateau for the seventh time. "Shot me in the foot."

Holtby picked up his seventh shutout and 30th win of the season.

"He made it look rather easy today," Capitals coach Barry Trotz said. "He was seeing the puck well."

Ovechkin and Nicklas Backstrom (assist) both moved into a tie for the NHL scoring lead with 65 points.

"He was launching them. He could have had five goals today," Trotz said of Ovechkin. "He was shooting BBs."

James Reimer stopped 28 shots for Toronto, which has lost 16 straight road games, six by shutout. The Maple Leafs went 0 for 4 on the power play.

Washington took a 1-0 lead when Ovechkin took a pass just inside the blue line, skated into the left circle, and fired a wrist shot past Reimer for Washington's fastest goal to start a game this season.

The Capitals had given up the first goal in each of their three loses. By contrast, they improved to 29-1-4 when scoring first.

"I think it was a good response by us, to have a good start," Ovechkin said. "We scored a goal and it kind of takes the pressure off."

The Capitals made it 2-0 at 5:30 of the second when Reimer stopped Brooks Orpik's blast from the point, but Ovechkin got the rebound and back-handed it in.

Holtby, meanwhile, thwarted several odd-man rushes, including against Zach Sill on a breakaway late in the second period.

Early in the third, Toronto's Richard Panik hit the post on an open-net backhander and slammed his stick into the glass in disgust.

"I thought tonight we were good, just a couple tough bounces against us and a couple of unlucky ones," Reimer said. "I thought we played another good road game."

The Capitals were also active off the ice over the weekend in advance of Monday's trade deadline.

They swapped defencemen with the Hurricanes on Saturday, acquiring Tim Gleason from Carolina Hurricanes in exchange for Jack Hillen and a draft pick. Gleason made his Capitals debut against the Maple Leafs.

On Sunday, Washington sent a pair of draft picks to Calgary for forward Curtis Glencross. The 32-year-old Glencross had nine goals and 19 assists in 53 games this season for the Flames.

NOTES: Toronto D Korbinian Holzer left early in the first period with an upper body injury. ... The Maple Leafs claimed D Tim Erixon off waivers from the Blackhawks. Erixon, 24, has a goal and five assists in 27 games this season. ... The Capitals re-assigned D Cameron Schilling and F Aaron Volpatti to Hershey of the AHL. ... Ovechkin was named the NHL's "Third Star" for the month of February. He led the league in goals (10), points (17), and power-play goals (five). ... "Wheel of Fortune" host Pat Sajak was in attendance.