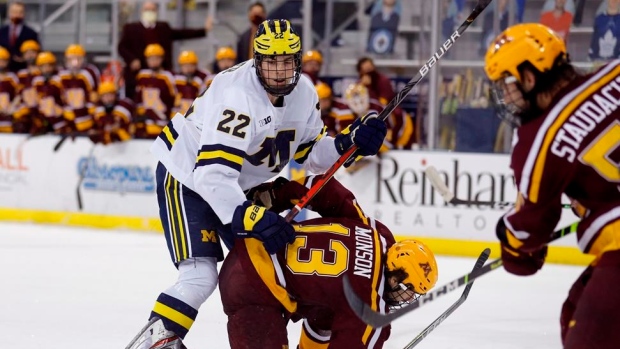 The University of Michigan is keeping its core together.

After news broke earlier in the week that No. 1 overall pick Owen Power would return to the Wolverines in 2021-22, No. 2 selection Matty Beniers and No. 5 choice Kent Johnson will also be returning to Michigan in the fall.

Power and Johnson are both expected to join Team Canada for World Junior Hockey Championship camp in December.

Power was the NHL’s Central Scouting Bureau’s top-ranked North American prospect. After scoring three goals and adding 13 assists in 26 games during his freshman season at Michigan, the 18-year-old Power cemented his draft stock by helping Canada win the 2021 World Hockey Championship in May. Buffalo Sabres general manager Kevyn Adams previously said Power's decision to return to school or join the Sabres did not affect his status as top pick.

Beniers, selected No. 2 by the Seattle Kraken, had 10 goals and 14 assists in 24 games in his first season at Michigan. The 18-year-old also played for the United States at the World Juniors and the World Championship, appearing in 13 games on the international stage in the past year. Beniers was originally bound for Harvard but when its season was cancelled, pivoted to join the Wolverines.

Selected by the Columbus Blue Jackets at No. 5 overall, the 18-year-old Johnson tallied nine goals and 18 assists for 27 points in 26 games at Michigan last season.

The Wolverines finished the 2020-21 season at 15-10-1 but had their season cut short in the NCAA Tournament due to COVID-19 protocols.