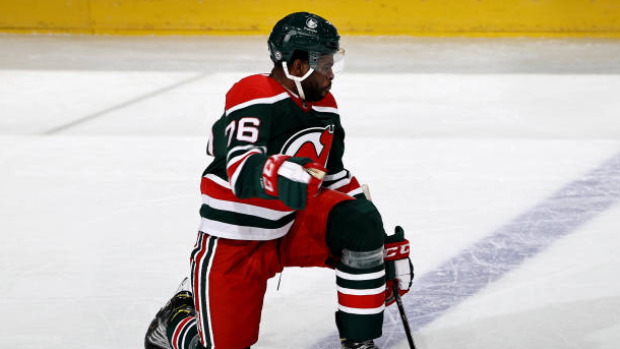 The Toronto-raised New Jersey Devils defenceman is an executive producer on the newly announced eight-part project, slated to air on CBC TV and CBC Gem in 2023.

Each one-hour episode will be helmed by a different Black Canadian director and explore 400 years of the Black experience in Canada.

Subban says he isn't sure he'll appear on camera for the project but feels his story is inherently part of it, "being from Canada as a Black hockey player, one of very few that have played the game and played it at a high level."

He says the most important thing is that audiences learn from the series about the full history of Canada.

"I think that's the toughest thing to do, is to be able to educate people that just don't know any better, they don't understand," Subban said in an interview this week from New York.

Norville, who splits her time between Toronto and New York, said the idea for the series stemmed from conversations with writer-filmmaker Nelson George about how a project on Black Canada was "long overdue."

"Being born and raised in Canada, what we learned in school was that Canada was the end of the Underground Railroad but other than that, this was a safe haven for Black people, and we are around the world known as the nice and benevolent country where there's no racism or any type of issues whatsoever," she said.

Norville said she longed to create something that dug deeper and reflected the multitude of Black experiences in Canada. She pitched the idea to the CBC in November 2019 and the public broadcaster was immediately on board.

"It's a very broad and deep and rich history that spans coast to coast and English-language Canada, French-speaking Canada, rural, urban, back to the 1700s through to today," said Norville, an award-winning producer and alumnus of the prestigious Sundance Documentary Creative Producing Fellowship.

Norville wanted to partner with someone who had an established track record of making series in Canada, so George put her in touch with de Pencier, whose producing credits including the CBC show "Anne with an E" and the films "Beginners" and "The Grizzlies."

George and Black Lives Matter Canada co-founder Sandy Hudson are the other executive producers on the series.

Norville said most of the creatives on the project are African Canadian, and the historians and consultants are all Black Canadians.

Norville wants the series to be "exciting, engaging and fascinating television to match the history."

"We don't want this to be a dry and boring kind of 'Black Canada's Greatest Hits,'" she said. "We want to look at this in a very nuanced way."

Subban called the project an "actionable item" on the road to racial reckoning.

"All I can do is do my part, do as much as I can do to keep it moving forward, and everybody has to do that," said the former Montreal Canadiens player.

"But we also need people that don't look like me to keep it moving forward."

Subban is working on "Black Life" through his company Ugly Duck Productions, launched in 2019.

Asked if this signals a bigger push into producing film and TV, he said he wants to do more as an athlete and have a greater impact "than just being on the ice."

"Maybe it becomes 'PK the politician.' Who knows? Why not, right?" the 32-year-old said with a smile, noting he still has "a lot of work to do" in hockey and still hopes to win a Stanley Cup.

"I have some unfinished business to do here. And then once that's finished for me, whenever that is, then I can look to other things. But right now, I want to focus on that, and while I'm playing I'm able to do projects like this."

This report by The Canadian Press was first published Sept. 16, 2021.