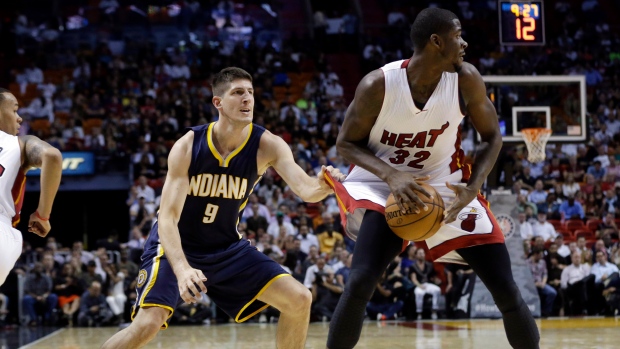 MIAMI - For the last three seasons the Indiana Pacers figured their toughness, defence and rebounding would be enough to ultimately knock off the Miami Heat.

These are not those same Pacers.

Chris Copeland scored 17 points and put Indiana ahead to stay on a layup with 43 seconds left, Roy Hibbert added 16 points and 15 rebounds and the undermanned Pacers beat the Heat 81-75 on Wednesday night.

"Sometimes that's what it's about, let our defence win it for us," Copeland said. "I think we made their shots difficult and sometimes on the road it's not pretty."

Indiana — which saw each of its last three seasons end with playoff losses to Miami — held the Heat to 17 points or less in each of the final three quarters, plus outrebounded Miami 53-28. The Heat even struggled when the Pacers struggled on defence; Miami missed 10 of its 18 free throws.

"You have to figure out a way to pull a few of these games out throughout the year," said Miami's Dwyane Wade, who scored a game-high 20 points. "We didn't do that tonight, but hopefully next time we're in this situation we learn from tonight and we figure out a way."

Donald Sloan added 15 points for Indiana, which has won two straight after a 1-6 start.

"Our guys (were) just competing their tails off," Indiana coach Frank Vogel said.

Ian Mahinmi's three-point play with 7 minutes left put Indiana up 72-65, then its largest lead of the night. Miami scored the next seven to tie it, then knotted the game again at 75 before Indiana closed on a 6-0 run.

Shawne Williams scored 15 for Miami. Chris Bosh was held to a season-low nine, on 3 for 13 shooting.

"This offence is predicated on ball movement," Bosh said. "And they really flattened us out."

The Heat had three late shots at the lead, but a jumper by Luol Deng missed, Hibbert blocked a dunk attempt by Deng and Bosh airballed a 3-pointer.

Indiana was missing six players, including four-fifths of its starting lineup from the last Pacers-Heat meeting — that being Game 6 of last season's Eastern Conference finals. Paul George, David West and George Hill are all hurt and Lance Stephenson is now with Charlotte, meaning Hibbert was the lone returning first-stringer from that rivalry.

Heat: Miami's 75 points were its lowest at home in a regular-season game since Feb. 27, 2010. ...F Chris Andersen (bruised ribs) returned after a five-game absence, appearing in his 599th NBA game. ... Miami extended its streak of making at least one 3-pointer to 199 games. ... Bosh had scored at least 20 points in each of Miami's first seven games.

The Heat honoured Alonzo Mourning at halftime for his induction into the Basketball Hall of Fame earlier this year, updating his retired jersey that hangs from the rafters to note his enshrinement. "I took a part of Heat Nation into the Hall of Fame," Mourning said.

Copeland scored in double-figures for the eighth time in the Pacers' nine games. He had four double-digit games last season.

Former Heat F Shane Battier was back Wednesday, helping announce that Billy Joel will have a concert in Miami on Jan. 31. Battier said he misses competition, but is content with his decision to retire.

Heat: At Atlanta on Friday.