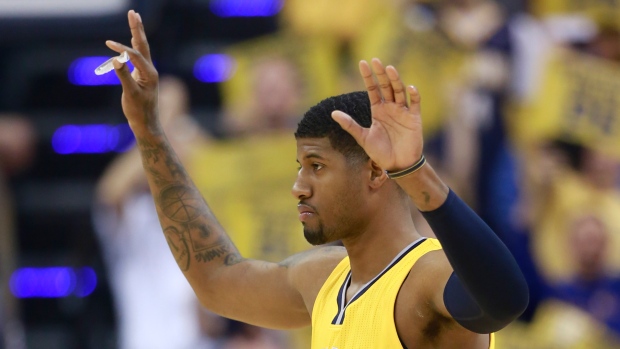 INDIANAPOLIS - Paul George savored every moment of his postgame stroll to the locker room.

He pumped his fist, traded high-fives with teammates, gave the No. 1 signal to the fans and heard coach Frank Vogel explain how much he had been missed. Yes, a little more than eight months after snapping his right leg snapped during a Team USA scrimmage, George returned to action.

He scored 13 points in 15 minutes and made two key 3-pointers early in the fourth quarter, helping Indiana rout Miami 112-89 as the Pacers moved to within one game of the final playoff spot. It was almost perfect.

"Everything that I expected," George said. "Welcoming me back into the game was probably the greatest moment that I've had. It was so hard to not get caught up in the moment."

George's return provided a needed boost for Indiana (34-43), which had seen its playoff hopes take a mighty tumble over the past three weeks. On March 12, the Pacers were closing in on Milwaukee for the No. 6 spot.

It couldn't have gone much better.

When George entered the game with 5:34 left in the first quarter, the hometown fans gave him a standing ovation and waved yellow signs that read "Welcome Back PG." The reaction never really dissipated.

Fans booed when George was called for his first foul. They roared each time he touched the ball. They gave him a rousing ovation when he made his first shot, a 12-foot fadeaway to his right, grimaced when he missed a breakaway layup that he normally would have dunked and erupted again when he made the two 3s to put away the dreaded Heat.

The support came from all corners.

His parents, sister, brother and daughter all attended.

In a pregame ceremony, Gen. Martin Dempsey, chairman of the Joint Chiefs of Staff, presented George with honorary dog tags that went to the rest of the U.S. players last summer while George was recuperating.

Duke coach Mike Krzyzewski, who coached Team USA when George was hurt, met privately with the Pacers star. Krzyzewski's team is playing for the national championship game on Monday night just a few blocks away from Bankers Life Fieldhouse.

"I just told him (I'm) happy to have him back," Wade said after scoring 27 points in Miami's fourth consecutive loss. "Right now he's working himself in, trying to get his confidence. His vision is to be as good as he can be next year, but he looked pretty good tonight."

When George sustained the gruesome injury during a scrimmage game in Las Vegas last August, nobody expected to see him back on the court this season.

George had other thoughts, and finally got the opportunity Sunday to demonstrate how far he's come.

He finished 5 of 12 from the field with three 3-pointers, two rebounds and two assists. Luis Scola scored a season-high 23 points to lead the Pacers.

Clearly, George is not completely healthy yet. He's still not moving like his old self and at times looked tentative.

Vogel said he expects George to play in each of Indiana's last five games.

And why not after Sunday night?

Miami took a 58-57 lead on Goran Dragic's 3-pointer midway through the third, but the Pacers closed the quarter on a 20-8 run to make it 77-66 and George's back-to-back 3s early in the fourth sealed Miami's fate.

"We've been seeing him play for five weeks so what we saw out there isn't any different from what we've been seeing," Vogel said. "He hasn't led the league in scoring, but he's been the best two-way player in the game, and I think we saw a lot of that tonight in terms of how he impacted both ends."

Heat: Miami played small because centres Chris Andersen (bruised left foot) and Hassan Whiteside (cut right hand) both sat out. But the Heat went just 2 of 20 on 3-pointers. The Heat have lost two of their last four games by more than 20 points.

Pacers: Indiana, meanwhile, thrived on 3s. C.J. Miles had five, two short of a season. The Pacers were 14 of 30 overall from beyond the arc and improved to 21-18 at home.