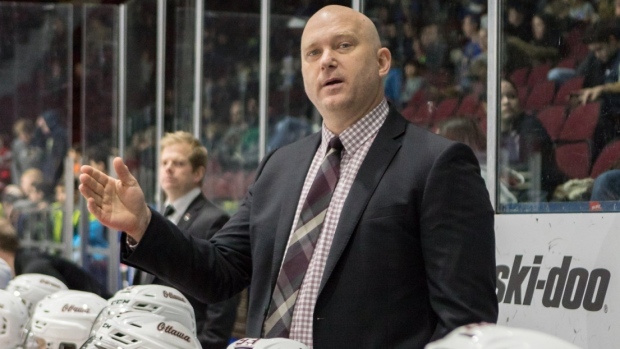 Andre Tourigny is feeling pain, but also keeping perspective as he continues to process the events of this month.

The Ottawa 67's head coach had been gearing up to lead his juggernaut squad on a championship quest. The team racked up 50 wins , tying a franchise record before their OHL regular season was halted six games early due to the coronavirus outbreak. A chance at history was washed away, but at least there was still the possibility to avenge last year's loss in the league championship series. Then on Monday that dream died as well with the CHL announcing the cancellation of its playoffs and, for the first time ever, the Memorial Cup.

The #CHL and regional leagues have made the difficult decision to cancel our 2020 Playoffs and @CHLMemorialCup.

We look forward with hope that next season will provide new opportunity to celebrate and that the #MemorialCup may be presented.

"It was heartbreaking," Tourigny said. "My thoughts were with our graduating players, players who have played their last game in the barber pole jersey, it's heartbre​aking. We have really good people, people who worked really hard for years to help us to build a good program ... I feel for the guys who ... it was their last kick at the can. It's tough."

There's a lot of time for Tourigny to play the what-if game amid the physical distancing of the Covid-19 pandemic.

"I guess, it's like everybody," he said of his new reality. "My wife works a lot, but for my boys, my daughter and myself we're in the house and doing a lot of reading, a lot of Netflix, a lot of gaming so a lot of nothing happening in the house, but that's what’s needed right now."

Tourigny understands this all too well, because h is wife is a nurse at a hospital in Gatineau, Que.

With all this weighing on his mind, Tourigny took some time to speak with TSN on Tuesday. He shared his insight on a magical season that ended prematurely while offering a scouting report on  two draft-eligible prospects in Marco Rossi and Jack Quinn. Plus, Tourigny looked ahead to the 2021 World Juniors in Edmonton and Red Deer where he will coach Team Canada.

The following is an edited transcript of the phone interview.

The Ottawa 67's did a video conference with the team yesterday. What was the message?

"It was really short, because not much can be said. We're really fortunate because our owners said they want to bring everybody back to Ottawa when it's possible to have a celebration of our season so that was a relief for the players. They will have a chance to see each other, but at the same time it's not the same thing, it's the best we can do under the circumstance so that was one of the messages. The other message was about exit meetings and we will do it by video conference and we will send them a few things to prepare for that. As for the rest, I gave them a message about how bad I felt about it and how proud I was of them all season with the way they worked. That was it."

Jack Quinn, another draft-eligible forward, went from scoring 12 goals last season to 52 this season, second in the OHL, where did he grow the most?

You spoke about how playoff experience is so important so with that in mind, how will the cancellation impact the evaluation process for the World Junior team?

"We will never know. We will never know if Player A would've scored 25 goals in the playoffs, it will have for sure improved his value and if Player B scored zero goals in the playoffs and had not done the job then that, for sure, would decrease his value, but we'll never know. I guess it's even for everybody. We'll have to go from what we know. But it's a great experience. A player who gets to live a Game 7 or a long run or a victory in the playoffs when they arrive at the World Junior the following year and they're in a do-or-die game, that's really important experience, but we will all be on the same page, I guess."

Will it put a greater emphasis on the start of next season assuming it is able to start on time?

"It was going to be important (anyway). The chance we have in Canada, the opportunity we have is we have a lot of depth so between the No. 9 forward and forward No. 20 is about the same. The difference between those 11, 12, 15 players is so thin so to make a difference between all of them, it's always tough, it's always a lot of viewing and a lot of feeling and you ask a lot of people their opinion and from there you make your opinion. So, that will still be the case, it'll be tough to know the final roster but, at the end of the day, that's a good problem to have."

What did you learn from serving as an assistant coach during the run to gold in Ostrava this year?

"Well, I learned to stay level. I think it's not stuff we didn't know, but it proved that if you stay the course and you keep playing the way you should and you stay level I think good things can happen. When we were down 3-1 (in the gold-medal game) we stayed level and when we went up 4-3 as well we stayed level. Nobody panicked, nobody was too high or too low on the bench, we just stayed level so that's the biggest take for me."

What was it like working with head coach Dale Hunter?

"It was great. He's not the guy who talked the most on the bench, but he's really fun to be around every day. He likes to chirp, he likes to have fun, he has no ego, he's a really down-to-earth guy so it was fun to be with him."

What did you enjoy about coaching Alexis Lafreniere?

"I've had the chance to coach him twice and what I like about Laff is he's a money player, he's a clutch player. At key moments, that's when he shined the most. I really liked his resilience this year after his injury, the way he came back, he gave a lot of energy to the team, not just that he came back, but the way he did it. The way he played the first shift and the physicality. I like a lot of things about Laff, but if there's one thing it's his enthusiasm every day, his smile every day and he loves to play hockey, has a passion for the game and that is what makes him so special to be around."