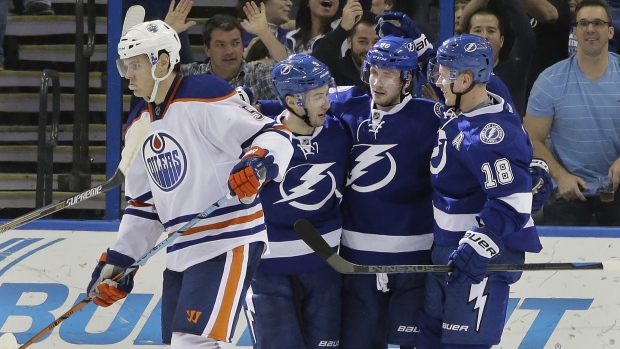 Ondrej Palat scored a pair of third-period goals, and the Eastern Conference-leading Lightning beat the Oilers 3-2 on Thursday night.

"Liked the ending ... leave it at that," Tampa Bay coach Jon Cooper said.

Steven Stamkos also scored in his fourth straight game for the Lightning, who overtook the idle New York Islanders atop the East

"I'm happy so far," Palat said. "Our team is in front in the standings, and that's what I want."

Tampa Bay finished a run of 21 games that included a 6-0-1 record against Edmonton, Buffalo and Carolina, the NHL's worst three teams. The Lightning went 5-8-1 against other opponents during that stretch.

"It wasn't our best two periods, but the guys certainly came alive in the third period," said Lightning goalie Ben Bishop, who made 30 saves. "It's hard to win games when you play 20 minutes, but we were able to do it."

Edmonton, which has lost 14 consecutive road games, got two goals from Benoit Pouliot. He has scored the last five Oilers goals.

"It's not like we're getting blown out every game like last year," Edmonton goalie Ben Scrivens said. "We've been playing better, but we've got to figure out it's easier to play defence in the third than try to score one late."

Edmonton took a 2-1 lead on Pouliot's second of the game, coming on a goal-mouth scramble during a power play with 57.3 seconds left in the second period. The left wing has a four-game goal streak.

Pouliot put the Oilers ahead 1-0 with a short-handed rebound goal at 13:52 of the first.

"The guys I'm playing with now are really clicking," Pouliot said. "Like tonight, we got chances and we got goals on it. It's just a matter of trying to win those games, and they're not easy to win."

Stamkos tied it 7:10 into the second on his 26th goal from the right circle. Matt Carle set it up right after serving a penalty.

During a one-minute stretch late in the second, Edmonton's Nail Yakupov hit the post, and Stamkos missed the net with an in-close shot and had another scoring chance blocked by defenceman Anton Lander.

"We had our chances in the third period, but I thought that if we buried a couple in the second where there were some Grade A (chances), the result might have been different," Oilers coach Todd Nelson said.

NOTES: Tampa Bay C Tyler Johnson returned after missing one game due to a lower-body injury and had two assists. ... Lightning D Victor Hedman missed his second game with a lower-body injury and might be out until after the All-Star break. ... Oilers C Ryan Nugent-Hopkins had two assists. ... Tampa Bay rookie Jonathan Drouin and F Brenden Morrow, pointless in 17 games, were scratched. ... Oilers C Boyd Gordon played in his 600th NHL game. ... NASCAR driver Brad Keselowski was at the game. A fan of the Red Wings, Keselowski spent time with current Chicago adviser Scotty Bowman, who coached Detroit to three Stanley Cup championships.