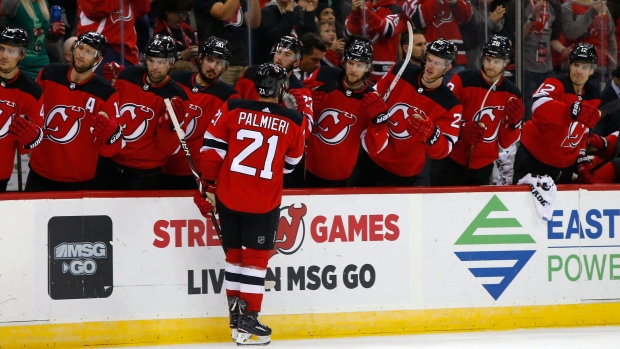 NEWARK, N.J. — Kyle Palmieri scored two goals for the third straight game and the New Jersey Devils rallied from their first deficits of the season to beat the San Jose Sharks 3-2 on Sunday.

Jean-Sebastien Dea capped the two-goal, third-period outburst with the game winner at 3:25 and Keith Kinkaid made 37 saves as the Devils started the season with three straight wins for the second straight year.

Joe Pavelski and Timo Meier scored for the Sharks, who are heading home after a five-game road trip. Martin Jones made 33 saves as San Jose lost to New Jersey for the third time in its last 11 games.

Palmieri, who had 24 goals last season, scored on a rebound in the crease 37 seconds into the third period to tie the game.

After Kinkaid made a save in close minutes later, Dea stuffed a loose puck into the net after Jones let a shot by former Sharks defenceman Mirco Mueller slip between his pads.

After a scoreless opening period, the Sharks took a 1-0 lead when Pavelski slammed home the rebound of a Brent Burns shot at 3:51 of the second period. It was Pavelski's 700th NHL point.

Palmieri tied the game at 7:06 with shot from the left circle with the Sharks playing two men short.

Meier put San Jose ahead with 4:25 left in the second period with a shot from the left circle on a quick counter attack.

NOTES: John Hynes coached his 249th game with the Devils, moving in third place in team history. Coincidently, he moved out of a tie with Pete DeBoer, the current Sharks coach. ... Sharks were 2-2-1 on road trip. ... Sharks F Evander Kane, who had four goals in the first five games, got his first assist of season on Pavelski's goal. ... Sharks D Erik Karlsson got a four-minute minor for a high-stick that cut Devils C Nico Hischier with 8:08 to play.