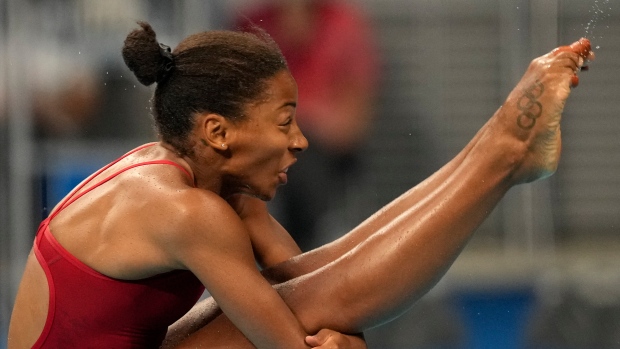 TOKYO — There will only be one Canadian in Sunday's three-metre springboard final at the Tokyo Olympics after a costly mistake by Pamela Ware in Saturday's semifinal.

Ware, who impressed in the preliminary round the day before, completely missed her approach on her fifth and final dive in the semifinal, forcing her to simply drop, feet first, into the water. She finished in last place.

Jennifer Abel of Laval, Que., was as solid in the semifinal as the previous day, finishing third with a score of 341.40.

Reigning Olympic champion Shi Tingmao of China was not as dominant as usual, but still finished well in the lead with 371.45 points. Her teammate Wang Han, making her Olympic debut at age 30, led the leaderboard into the third round of diving before finishing in second place, almost 25 points behind Tingmao.

Abel, a silver medallist in last week's three-metre synchronized springboard alongside teammate Melissa Citrini-Beaulieu, will now seek the individual Olympic medal that eluded her in 2016. She finished fourth in the three-metre springboard in Rio.

The top-12 semifinalists earned a spot in Sunday's final.

This report by The Canadian Press was first published July 31, 2021.