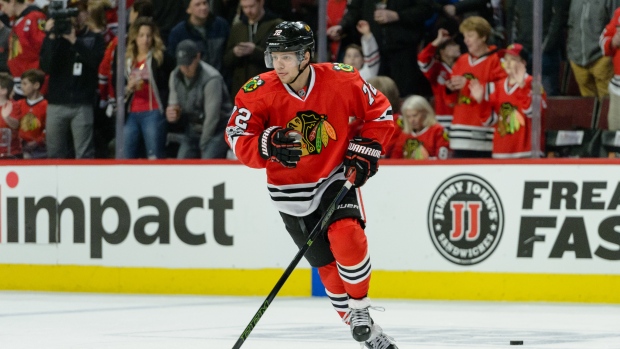 Chicago Blackhawks forward Artemi Panarin has apologized after a 2012 video surfaced in which the 2016 Calder Trophy winner said he could "never have sex with a black woman."

The video was part of a "Get to Know a Player" feature for a Russian TV network interviewing the stars of the Kontinental Hockey League. Then-teammate Yaroslav Tulyakov asked Panarin, "What could you never do?" which prompted the response. The comment appeared to have been a joke as Panarin followed up with a seemingly more serious response of "I would never walk at night."

The video appeared on Faxes from Uncle Dale, a Blackhawks fan blog on Tuesday. The video has since been taken down from YouTube.

"In 2012, I was a guest on a Russian TV show and made insensitive comments that I deeply regret," Panarin said in a statement the Blackhawks released to Chris Hine of the Chicago Tribune. "I understand my comments are offensive and I apologize for my hurtful words."

The team also released a statement to Hine.

"On Sunday, we were made aware of the video from Artemi’s appearance on a Russian TV show in 2012," the Blackhawks said. "We immediately addressed the matter with him. His comments in the video in no way represent the values of our organization. He has apologized and understands the offensive nature of his words."

Panarin, 25, signed a two-year extension worth $12 million with the Blackhawks in December.

The revelation of Panarin's comments come on the heels of the conclusion of "Hockey Is for Everyone," a month-long campaign by the NHL to "drive positive social change and foster more inclusive communities."

As part of the campaign, the Blackhawks held a screening of the 2015 documentary Soul on Ice: Past, Present and Future, a film that details the contributions to the game of hockey made by black players.