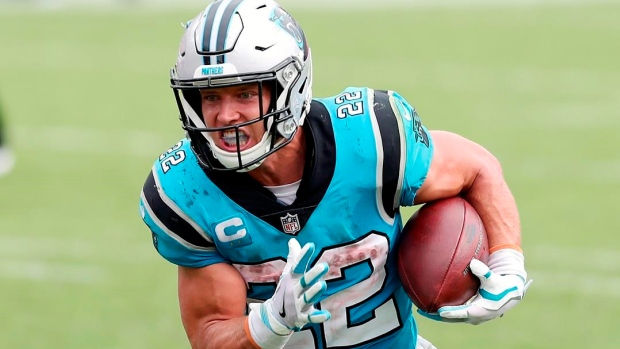 CHARLOTTE, N.C. — Christian McCaffrey has been designated for return from the team’s injured reserve list, increasing the likelihood Carolina’s 2019 All-Pro running back will play Thursday night against the Atlanta Falcons.

McCaffrey arrived at Panthers practice Tuesday with a red jersey and a baseball cap signifying an injured player, but he quickly changed into a black practice jersey and a helmet.

McCaffrey hasn’t played since Week 2 when he suffered a high ankle sprain in a loss to the Tampa Bay Buccaneers.

Panthers coach Matt Rhule reiterated Tuesday that he is “hopeful” McCaffrey will ready to play against the Falcons, but added that the decision was largely up to the training staff.

“He looks good,” Rhule said. “He looks like he is moving around great. We will let the medical people and him determine how much he can do and whether he can play in a game.”

McCaffrey was off to a solid start with 223 yards from scrimmage and four touchdowns in the first two games.

Rhule said McCaffrey was “exhilarated” to be out at practice with his teammates.

“I know he wants to play, but I also know he's a process guy and he understands that we can't shortcut the process,” Rhule said.

McCaffrey's backup Mike Davis had 149 yards from scrimmage and a touchdown in Carolina's 23-16 win against Atlanta earlier this month. Rhule said Davis will still see some action at running back even if McCaffrey returns.