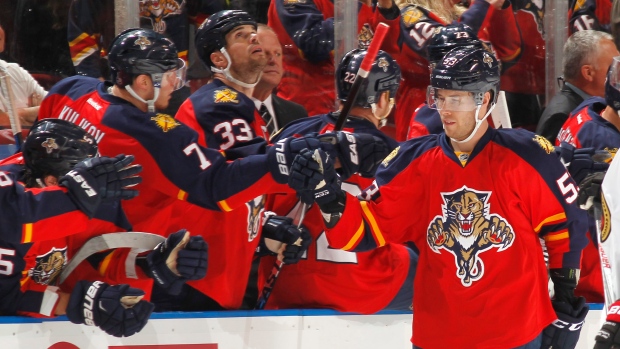 SUNRISE, Fla. - Aleksander Barkov is making a habit of producing in shootouts.

Barkov scored the clinching goal in the tiebreaker Tuesday night to lift the streaking Florida Panthers to a 2-1 victory over the Ottawa Senators.

"I said to you last game I don't have any (new) moves, so I have to shoot," Barkov said. "For sure, it's a good Christmas present for all of us."

Brandon Pirri also scored a shootout goal for Florida, combining with Barkov in the tiebreaker for the second straight game. Roberto Luongo stopped both Ottawa attempts to give the Panthers their fifth straight win. Florida has won 11 of its past 14.

Jaromir Jagr lost four teeth when he took a stick to the face from Alex Chiasson midway through the first. Jagr bled profusely from his mouth before leaving the game briefly.

"I lost some teeth, but I increased my speed as you can see it on the breakaway," Jagr joked.

On the way to the bench, Jagr stopped to pat Chiasson on the back of the head.

"I obviously didn't mean to hit him," Chiasson said. "It was nice of him to shake it off a little bit."

Corban Knight scored in regulation for the Panthers, and Luongo made 15 saves. Jagr had an assist.

"Right now we're finding different ways to win every night, whether that's 1-0 or a shootout or a high-scoring game. Good teams do that," Luongo said.

The loss spoiled a stellar effort by Anderson.

"These games are fun. You're just kind of in the moment. You just play the game and give your team a chance to win," Anderson said. "We were just on the other side of the shootout. ... To get out with a point the way things went, you've got to be happy with that."

The Senators have lost five of their past seven, and five straight on the road.

Ottawa had just 12 shots through the first two periods, only two in the third and two in overtime.

"I thought the first two periods we struggled to get the puck through the zone," Senators coach Dave Cameron said. "A little bit out of sync, but we found a way to get a point."

Stone tied the score 1-all with his power-play goal 1:31 into the third. Erik Karlsson's shot from the point bounced off Stone and over Luongo's shoulder into the net.

Knight put the Panthers ahead 1-0 at 9:14 of the first. He took a pass from Quinton Howden in the left circle and poked the puck past Anderson.

A previous version of this story corrected save totals for Luongo and Anderson to reflect postgame scoring changes.