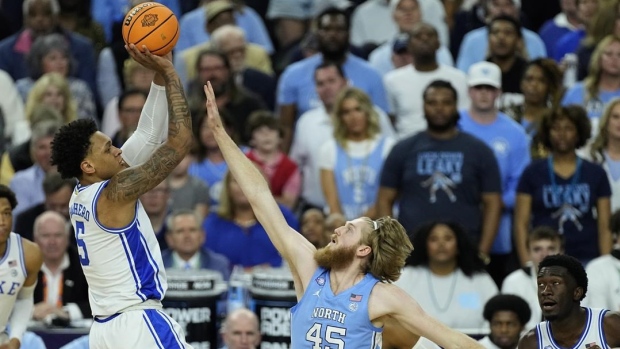 Duke’s Paolo Banchero is leaping to the NBA after one season as a candidate to be the No. 1 overall draft pick.

The 6-foot-10, 250-pound freshman announced his decision in a social media video Wednesday, with the school saying he planned to hire an agent.

The freshman had been viewed as a likely one-and-done player even before he stepped foot on the Durham, North Carolina, campus from Seattle. Blessed with a strong frame, size and perimeter skills, Banchero went on to become a third-team All-America pick by the The Associated Press, and ranks No. 2 in ESPN's latest list of draft prospects.

In a statement from the school, Krzyzewski said Banchero is “absolutely ready to attack the next phase" of his career.

“He is so dynamic, explosive and versatile — a model player in today’s NBA game. He did whatever we asked at a very high level,” Krzyzewski said. "I loved having him and his family in our program and wish him all the best as his professional career begins.”

Banchero also took advantage of opportunities for college athletes to cash in on their fame with endorsements, which began last summer with the NCAA permitted athletes to profit from use of their name, image and likeness (NIL).

In Banchero’s case, he worked with Creative Artists Agency (CAA) for marketing deals and got deals that included becoming the first player featured in the latest NBA 2K video game as well as a basketball trading card from Panini as part of a multi-year deal.

Now he's off to make even more money in the NBA.