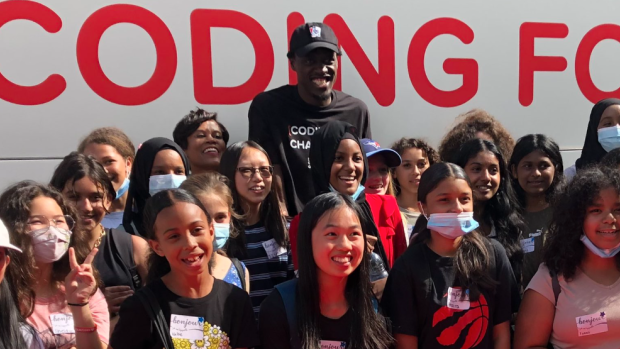 Pascal Siakam at this year's Coding For Champions event

Being in the off-season since April, Pascal Siakam could be absolutely anywhere during his time off from a lengthy campaign. Instead, he was back in downtown Toronto speaking to young girls and connecting with the local community.

The Raptors star was at Regent Park’s Dixon Hall community hub as part of his third “Coding for Champions” event put on by his own Pascal Siakam Foundation. In partnership with Penny Appeal Canada, Siakam handed out over 150 laptops to girls ages 12-14 in order to help stimulate their interest in technological fields.

This year’s cohort of Coding for Champions event was exclusively an all-female one as the focus of this year’s initiative was to close the gender gap in technology and STEM-related fields. Women make up roughly 34 percent of Canadians with a degree in a STEM field, but only make up about 23 percent of the workforce in Canada's science and technology sector, according to Statistics Canada.

“There is a digital divide and gender inequity in technological fields,” said Siakam in a press statement for the event. “As the world continues to move in the direction of science and technology, we are working toward lessening the gender gap in STEM with this group of amazing young girls and want to show them a future in such fields is a great option for their careers.”

Coding for Champions had raised a total of $406,000 leading up to this year’s event, with all 360 students across three cohorts receiving a laptop. Joining Siakam in handing out the laptops was Marci Ien, MP for Toronto Centre, as well as the minister for women and gender equality and youth.

In addition to the students, hundreds of parents and interested onlookers came out to get a glimpse of Siakam.

.@pskills43 in Toronto today supplying young girls with laptops as part of his initiative supporting youth in STEM fields 👏 pic.twitter.com/MeGCm3PYJt

“I think that having the support of all these people means everything to me, and makes it worth it,” Siakam told reporters at the event. “I feel really connected to the city.”