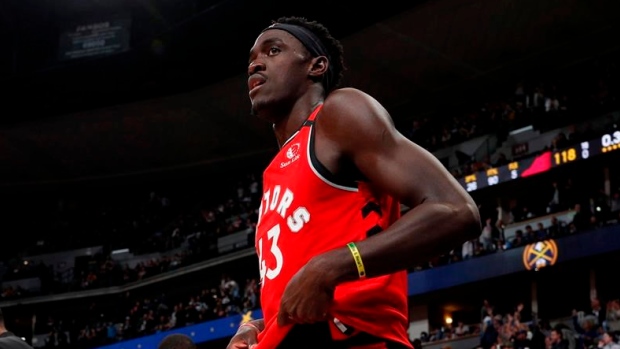 TORONTO — Pascal Siakam feels the suspicious eyes on him when he walks into upscale shops.

The Toronto Raptors forward said in his 10 years since moving from Cameroon, he's come to expect the racial profiling he experiences living as a black man living in the United States. It's bleak, but it's a part of life he's stopped being shocked by. And that fact alone is painful.

"Going to a store, people are looking at you a little different and wondering if you're gonna buy something, they're watching you a little bit. . . that definitely wouldn't happen where I'm from," said Siakam, who moved from Douala, Cameroon to the U.S. when he was 16.

"The sad part for me is being able to normalize it. I felt like OK, that's just what happens when you're that colour. . . I have to just accept the fact that people are going to look at me a little weird, and they're gonna watch me a little bit.

Siakam spoke to reporters on a conference call Wednesday amid plans for the NBA to resume its season in late-July. But much of the conversation was around the mass protests against racial injustice and police brutality in the U.S.

Siakam felt he knew what to expect when he moved to the United States as a teenager to play basketball. He was well-educated on different cultures. Still, suddenly being a minority in a country with a long history of racism was a "shock."

"Back home, any other race is the minority. I'm used to being the majority of the population and seeing people that look like me," Siakam said. "I knew what was coming. But going into it, it was all so strange. . . obviously it's a different culture than my culture where I'm from."

The boiling-point protests in the U.S. come after George Floyd was killed last week when a white Minneapolis police officer pressed a knee in to the 46-year-old black man's neck for nearly nine minutes.

Siakam's brothers Boris, Christian and James all played NCAA basketball, but Siakam, who played high school basketball for God's Academy in Lewisville, Texas, and then college ball for New Mexico State, said the brothers rarely spoke about racism in the U.S.

"Which is another problem because we don't rally talk about these things enough, I feel like, and it should be talked about. We can't be avoiding the conversation anymore," Siakam said. "Those times are over and it's time to talk about it. It's time to address the problem, the issues."

One of Siakam's brothers told him a story last week about when he was working at Enterprise Car Rental and a woman walked in and asked to speak to "an American."

"Maybe because he is African or maybe his accent or maybe because he was black," Siakam said. "Just things like that . . it just shows you the true colours and how deep this runs. I think everyone is tired of it and everyone feels like it's time that it stops."

Siakam said he was "speechless" thinking of the cellphone video that captured Floyd's death.

"I think about the families and the people — you know he was crying out for his mom," Siakam said. "I know how big I am on family. I can just connect to that and I'm a black man. It hurts, like it hurts."

What advice would he give white people wishing to be informed and supportive?

No. 1, he said, is acknowledging that racism exists.

"I think a lot of people don't do that and we tend to act like it's not happening or 'I'm not seeing it where I'm from or where I live,'" he said. "This is something that exists and I'm sorry to say it but if you don't see it then you must be blind or something."

Siakam has been in Toronto since the NBA shut down on March 11 due to COVID 19. It's the first time he's spent more than month away from playing basketball since he took up the game.

Despite being one of the top teams in player minutes lost to injuries, the Raptors were second in the Eastern Conference (46-18), had just locked up a playoff spot, and were coming off a five-game west coast road trip that saw them go 4-1 when the league shuttered.

The NBA hopes to restart in late-July. The league reportedly has told its players association that it will present a 22-team plan for a restart to the board of governors on Thursday. Each team would play eight games in Orlando to determine playoff seeding before the post-season begins.

Siakam said being able to finish the season would mean a lot of the defending NBA champions.

"Obviously you don't want your season to just go to waste, there's been a lot of blood, sweat and tears go into the whole season, working hard, I think particularly for us with injuries and everything that we've been through, trying to get healthy all season, and working really hard as a team, and beating the odds each and every game," he said. "Obviously we don't want to see it end like that, so we want to be able to play and continue to move forward and hopefully that can happen, and we're excited about attacking that other title."

In the meantime, Siakam has tried to maintain a positive outlook on the global pandemic lockdown. He's learning to play the piano, is reading more, studying more game film, and using the rare free time to keep connected to people he cares about.

"I've been trying to just obviously stay with family, people that I love. I think this time is important to share love and be around people that you care about. That's the main thing for me," Siakam said.

"We can definitely lose sight of that with everything going on, while we're just running around going from city to city, that can get lost a little bit."

This report by The Canadian Press was first published June 3, 2020.