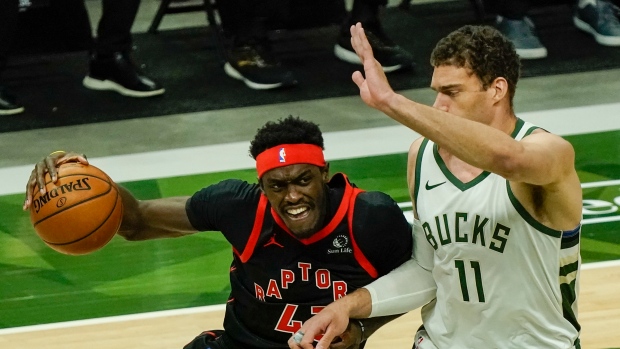 TORONTO – The Raptors thought their nightmare 2020-21 season was over, but they’ve taken another hit.

Pascal Siakam is expected to be out for approximately five months after undergoing surgery to repair a torn labrum in his left shoulder last week, the team announced on Friday.

It’s a tough blow for the star forward and Toronto’s leading scorer, whose tumultuous campaign came to an early end when he sustained the injury in a loss to Memphis on May 8.

With his likely return coming in early November, not only will he miss training camp and the first few weeks of the 2021-22 season, which opens on October 19, but his plans for this summer have shifted from his typically exhaustive off-season training and development program to rehab and recovery.

Siakam and the Raptors had hoped to avoid surgery and take the rest and rehab approach instead, but the risk of re-injury – and the projected severity of a subsequent injury to that shoulder – was ultimately deemed too high, according to a source close to the player. An arthroscopic repair was the best long-term option.

It’s one of the procedures that Clippers forward Paul George underwent in the summer of 2019, ahead of his trade from Oklahoma City to Los Angeles. George would end up missing six months, but his injuries were more severe and he had surgery on both shoulders. Siakam’s recovery should be quicker. The hope is that he’ll be able to begin limited individual on-court work in July.

Coming off a disappointing campaign – one in which he struggled with consistency and closing out games, faced questions about his off-court leadership and demeanour, spent nearly three weeks in the league’s COVID-19 protocols, and ultimately missed the playoffs for the first time in his five-year career – Siakam was looking forward to his longest off-season in years. It was supposed to be another opportunity to lock himself in the gym, participate in the famed and star-studded UCLA runs, and continue to expand his game, like he’s done so many times before.

That opportunity is not lost, at least not completely. He’ll be able to work on certain aspects of his game, albeit in a limited capacity. He’ll obviously be able to watch and analyze film. Still, this isn’t how he envisioned his summer.

Siakam is in good spirits, given the circumstances, the source tells TSN. This is more downtime than he expected or wanted to have early in an important off-season, but he understands that it’s for the best. Opting for surgery will ensure that his shoulder strengthens and heals properly.

In the short-term, though, it’s another setback and yet another obstacle that the 27-year-old and his team have to overcome.

Siakam looked to be turning a corner late last season. During a 22-game span shortly after returning from the health and safety protocols and before injuring his shoulder, he averaged 24.0 points, 7.5 rebounds, 4.0 assists and 1.2 steals while shooting 47 per cent from the field. Lost in some of his poor performances and late-game misfortune earlier in the year, that was arguably the best stretch of his young career. It was on par with and even exceeding his numbers from a breakout 2019-20 season, which earned him his first all-star selection and All-NBA second team honours.

That’s the player the Raptors were hoping Siakam would grow into when they signed him to maximum salary contract extension in 2019, and that’s the version they’ll need if they’re going to bounce back after their seven-year playoff streak was snapped.

However, this might be an off-season of change for Toronto, which only has four players on guaranteed contract for next season: Siakam, Fred VanVleet, OG Anunoby and Malachi Flynn.

The Raptors own the seventh-best odds in the June 22nd draft lottery and will have a big decision to make on draft night next month, regardless of where they’re selecting. Kyle Lowry and Gary Trent Jr. (restricted) are among the players that will hit the open market when free agency begins in early August. Meanwhile, the future of team president Masai Ujiri, whose contract is also set to expire, remains up in the air.

Then there’s Siakam, who represents more than 45 per cent of the money they currently have on the books for next season and is a fundamental part of whichever direction they choose to go in from here. When will he be ready to return and, crucially, how long will it take him to get up to speed? How much will a limited summer, lost training camp, and late start set him back next season?

It creates even more uncertainty going into what could be a chaotic few months for the organization.