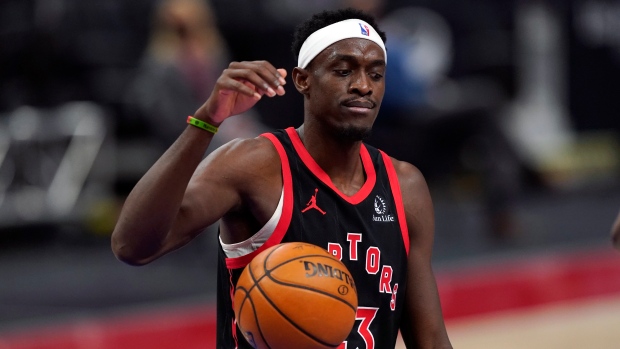 Pascal Siakam has a number of admirers across the NBA.

Jason Anderson of the Sacramento Bee reports that the Kings, along with the Los Angeles Clippers and Golden State Warriors, are "enamoured" with the Toronto Raptors forward and Raptors president Masai Ujiri is "listening like a good negotiator," but while a trade is possible, it remains unlikely.

Anderson notes that the 27-year-old Siakam has no desire to leave the Raptors as he enters into the second season of a four-year, $136.9 million extension.

An All-Star in 2020, Siakam is heading into his sixth NBA season after being selected with the 27th overall pick of the 2016 NBA Draft out of New Mexico State.

Anderson's report also indicates the Kings have also shown interest in Philadelphia 76ers guard Ben Simmons as general manager Monte McNair looks to make the first major splash of his tenure in charge of the team. McNair joined the Kings last September after 13 seasons in the Houston Rockets organization.

The Kings are coming off back-to-back seasons of a 31-41 record. The team finished last in the Pacific Division and missed the playoffs for the 15th consecutive year. The team last won a playoff series in 2004.