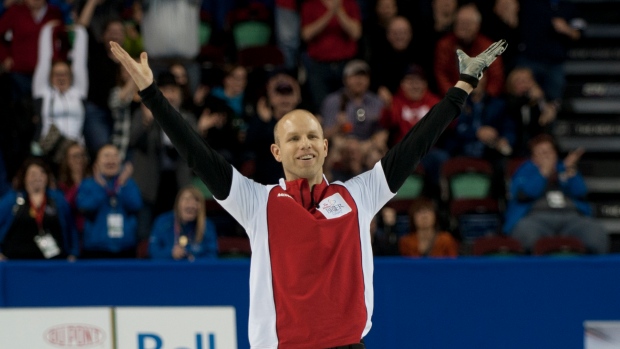 Two-time Brier champion Pat Simmons is coming out of retirement to skip a new Manitoba-based team next season.

The 46-year-old will take over the skip duties for the team that was previously led by Tanner Horgan, featuring third Colton Lott, second Kyle Doering and leads Tanner Lott and Emerson Klimpke.

ANNOUNCEMENT: We are thrilled to welcome 2X Brier Champion Pat Simmons aboard as skip for our Pre-Trials run. Full details here: https://t.co/C9LeiOfSXv

Simmons played with Lott and Doering during the 2017-18 season before heading into a four-year retirement.

“It was definitely a surprise when Kyle [Doering] reached out to me and pitched the idea to return to competitive play and skip their team at the Olympic Pre-Trials this October,” said Simmons in a news release by the team. “With their team being in the same unique position as four years ago and the familiarity I have with Colton and Kyle, I thought it would be a great opportunity to give it another shot.”

Lott, who grabbed the silver medal at the recent Canadian Mixed Doubles Curling Championship with partner Kadriana Sahaidak, says they were looking for someone experienced to help them as they prepare to compete at the Olympic Pre-Trials event in the fall.

“With Tanner Horgan leaving our team and not much time left to prepare for the Olympic Pre-Trials, we decided to look for a seasoned skip that would be used to the pressure in the upcoming months,” said Lott. “When Kyle suggested asking our previous skip Pat to return, I was very excited at the possibility of curling with a player of his stature."

Simmons is a native of Moose Jaw, Sask., and won back-to-back Canadian championships in 2014 and 2015. He also claimed bronze at the 2015 World Men's Curling Championship.