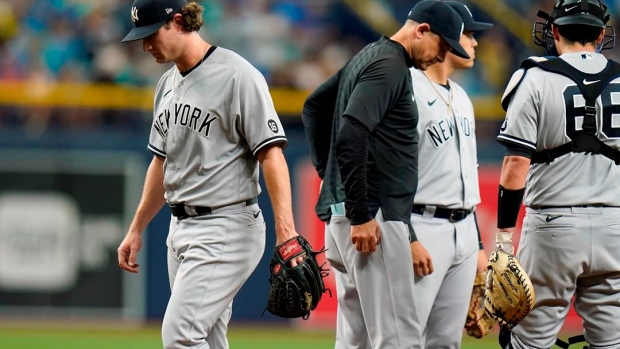 “Today was a marvelous day for me,” Patiño said through a translator. “I felt good since I got here, even in the bullpen I felt pretty good right from the get-go. My pitches felt really good and I thought it was a very beautiful outing.”

“Sweeps are tough,” Cole said. “In respect to this series, this one is on me.”

Austin Meadows homered twice and drove in five runs for the Rays. Louis Head and Ryan Sherriff completed a four-hitter.

The Yankees began the day 8 1/2 games behind Boston in the AL East. The Rays trailed the Red Sox by 2 1/2 games.

“Clearly we have a little bit of an uphill battle," Yankees manager Aaron Boone said. “We've got to play really good baseball the final two months of the season to give ourselves a chance to get into the dance. But there's no question in my mind, we get hot at the right time, that we're capable of not only playing with but beating anyone in the sport.”

Both are expected to join the team for Friday night's game at Miami.

“First of all, innings like that, games like that are few and far between,” Phillips said. “That's what makes baseball so fun right there."

All nine batters in the Rays' lineup reached base in the sixth. It was the biggest scoring inning by Tampa Bay since a 10-run fifth at Miami on June 5, 2008.

It was the most lopsided shutout win ever by the Rays.

Brandon Lowe drove Cole’s first pitch in the first inning down the right field line near the pole. It was ruled a homer, but the umpires gathered and changed it to a foul ball, which brought Rays manager Kevin Cash onto the field. After talking with Cash, the umpires opted for a video review that found the drive was foul.

Cole, who's 1-6 against the Rays in the regular season, then retired 16 of 17 before Meadows had a one-out single in the sixth.

WHAT GOES UP DOESN’T ALWAYS COME DOWN

Randy Arozarena hit a high foul ball off Cole just behind the plate in the third inning that got stuck on an overhanging structure at Tropicana Field. Cole, catcher Kyle Higashioka and Arozarena all had looks of confusion as they looked up for the ball.

Boone continues to consider having designated hitter Giancarlo Stanton make his season debut in the outfield during this weekend’s interleague series at Miami. He didn’t rule out using an outfield of Stanton, Gallo and Aaron Judge.

Yankees: RHP Luis Severino (Tommy John surgery) threw a three-inning simulated game. He will start a minor league rehab assignment Tuesday. ... 1B Luke Voit (left knee inflammation) hit against Severino and should be back this weekend.

Rays: DH Nelson Cruz (bruised foot) was out of the lineup for the second straight game but was available off the bench. ... RHP Pete Fairbanks (right shoulder inflammation) was placed on the 10-day injured list.