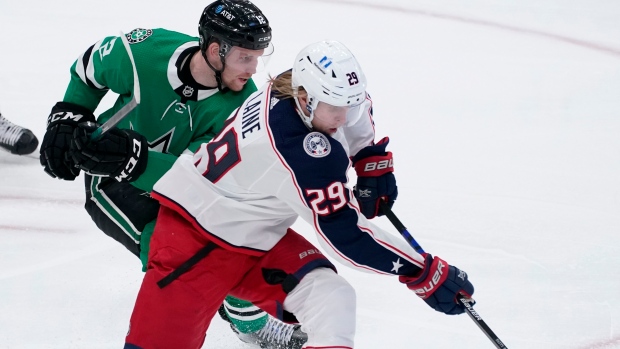 Patrik Laine did not play in the final 6:53 of regulation and did not take the ice for 3-on-3 overtime Thursday night in Columbus' 5-4 loss to the Florida Panthers.

After the game, Laine said: “I thought I was playing good, but I guess I thought wrong."

#CBJ Patrik Laine did not play in the final 6:53 of regulation and did not take the ice for 3-on-3 overtime.

“I thought I was playing good, but I guess I thought wrong."

The Blue Jackets winger ended the game logging 14:43 minutes, with one goal and two points.

This comes after the winger spoke about his confidence level on Thursday afternoon, admitting to reporters that he’s struggling. Prior to Thursday’s game, Laine had been held without a point in seven straight games.

“Probably closer to zero, I would say, around there,” he said.

“I have. I have. We’re still humans. You know, you’re going through tough times every now and then and sometimes it lasts two games and sometimes it’s seven games. You don’t know,” he said. “But you’ve just got to work your way out of it and that’s what I’m going to try to do – help the team win. Obviously when the team is winning you’re probably going to play better, so that’s what we got to do and win some more games and work ourselves out of it.”

Head coach John Tortorella moved the struggling left winger over to the right side Tuesday night against the Florida Panthers. Laine was held off the scoresheet in 19:57 of ice time as Columbus fell 4-2 for its second straight loss before Thursday’s defeat.

When asked if he has a preference which wing he plays, Laine admitted he feels more natural on the left but is willing to be flexible.

“I feel like I have more moves over on the left side but now, obviously, with not too much confidence it’s not ideal that you have to make all the plays on your backhand. I think normally in a normal situation I would probably rather want to play left side, but I’m just as comfortable on the right. I’ve played both enough to be flexible, so it really doesn’t matter which side I play," he said.

Since being moved to Columbus, Laine has scored seven goals and added five assists in 18 games.

Laine acknowledged that being traded and forced to move to another country in the middle of a global pandemic isn’t ideal. It’s an adjustment he’s still trying to make, but he conceded the organization has helped make things easier.

“Still haven’t been here for a long time but it starts to feel like home. You know, just being here by myself in a temporary house, it’s not ideal but that’s just the way it is right now, and you just try to adjust,” he said. “But can’t thank the guys and the organization enough for making this the easiest possible for me and everybody has been great. My teammates are awesome, everybody who works here is awesome, so it’s been an easy transition for me to come here and I’ve enjoyed every minute of it,” he said.

“It’s the same thing for everybody so you just try to make it work as well as we can and just focus on the things we can do better on the ice and not worry about the stuff that’s going on off the ice.”