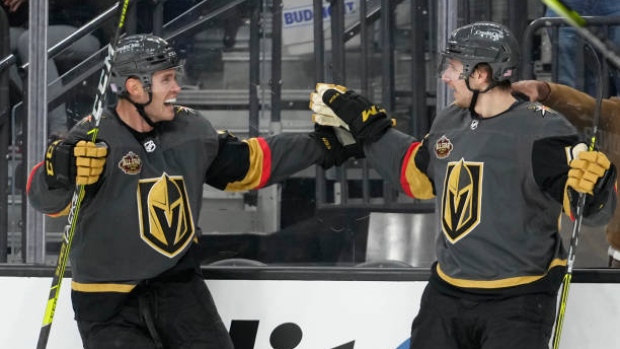 Jonathan Marchessault also scored for the Golden Knights, and Laurent Brossoit made 24 saves.

Cotter, taken in the fourth round of the 2018 draft, got things going when he took a pass in the neutral zone, zipped by Dmitry Kulikov and scored his first career goal to give Vegas a 1-0 lead 6:08 into the game.

Rondbjerg got his first roughly 10 minutes later after fending off Alex Goligoski near the Minnesota bench, breaking free and then beating Talbot with a snap shot from the slot.

The Wild had their best chance to tie the game with back-to-back 5-on-3 power-play opportunities in the second period.

After Vegas’ Shea Theodore was called for hooking, Nic Hague joined him in the penalty box after being whistled for delay of game, giving the Wild a two-man advantage. Then, 21 seconds after Theodore’s penalty expired, it was Alex Pietrangelo sitting next to Hague in the box for the same infraction.

Between a stellar defensive effort by veteran blueliner Brayden McNabb, negating several passing lanes, and Brossoit making a handful of saves — including one on Joel Eriksson Ek from point-blank range — the Golden Knights got what might have been the loudest roar of approval from an announced crowd of 18,267 that they’ve gotten all season.

Marchessault put an exclamation point on the second period when he took Reilly Smith’s slick pass through Jonas Brodin’s legs and beat Talbot with a laser of a wrist shot with seven seconds left to give Vegas a three-goal advantage.