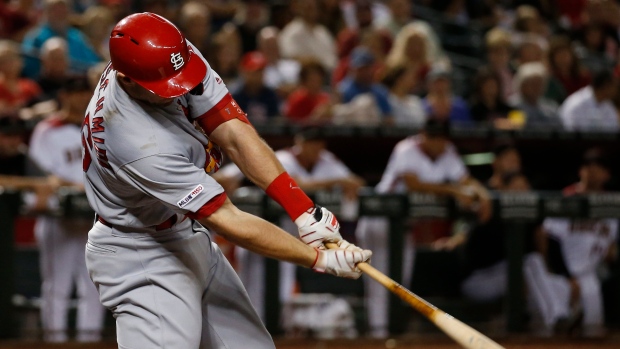 PHOENIX — The Arizona Diamondbacks made it obvious they appreciated Paul Goldschmidt in his return to the desert, honouring him with a tribute video before the game and multiple ovations throughout the evening.

Clearly, everyone thought this night was a pretty big deal.

Except for the man being honoured. The stoic first baseman still had work to do.

Goldschmidt smacked a two-run homer in his Chase Field reunion, Yadier Molina also had a two-run shot, and the St. Louis Cardinals beat the Diamondbacks 9-7 Monday night for their sixth straight win.

"It's all what you make of it, and for me this was just another game," Goldschmidt said. "I'm appreciative of all the fans coming out, cheering me on, the standing ovation. But I just didn't want to make too big a deal of it."

For Goldschmidt, the real importance of the game was that his team won again.

The Cardinals have a 3 1/2-game lead over the Milwaukee Brewers in the NL Central. St. Louis has five games remaining in the regular season while Milwaukee has six.

The Diamondbacks — who have hung around the fringes of the NL wild-card race for months — were officially eliminated from post-season contention.

"We left some money on the table throughout the course of the season and those are the things that we are going to have to address and tighten up a little bit," Arizona manager Torey Lovullo said.

Goldschmidt had a big night in his return to Arizona after playing eight years for the Diamondbacks from 2011-18. He got a loud ovation from fans in the first inning before drawing a walk.

In the third, he drove a change-up from Alex Young just over the right-centre field fence for his 32nd homer of the season and 100th in his career at Chase Field, which is the most in the stadium's history.

"Good for Goldy," St. Louis manager Mike Shildt said. "Obviously, in the moment, but it's just a really special return for him I'm sure. Really class job with the tribute."

Adam Wainwright (14-9) won his fifth straight start, though he didn't have his best stuff. He gave up eight hits and five runs over five innings.

Young (7-5) gave up six earned runs over five innings. He struck out five and walked two.

Arizona fell behind 6-2 in the fifth inning after Molina's two-run homer, but scored three runs off Wainwright in the fifth to pull within one.

St. Louis got breathing room in the eighth inning when Harrison Bader ripped a solo homer to left field and the offence added two more runs in the ninth. Carlos Martínez earned his 24th save.

The Cardinals were sharp in another win despite coming off an intense four-game sweep of the Chicago Cubs, who are also fighting for playoff position. Goldschmidt said the team's stoic personality has been an asset.

"We don't get too down or too excited," Goldschmidt said. "We just play hard every day."

Goldschmidt acknowledged the crowd after the video tribute, waving his hat.

The 32-year-old first baseman hit .297 with 209 homers and 710 RBIs in his Diamondbacks tenure while helping the team make the playoffs in 2011 and '17. He also made six NL All-Star teams and won three Gold Gloves.

He was traded during the off-season for catcher Carson Kelly, pitcher Luke Weaver, infielder Andy Young and a draft pick.

Diamondbacks: Lovullo said RHP Taijuan Walker (Tommy John surgery) threw a 20-pitch bullpen session and the pitcher "was very encouraged" by the outing. If Walker still feels good on Tuesday, he could pitch in a game before the end of the season on Sunday. ... RHP Weaver could pitch in another game this season after a successful return on Sunday. Weaver (forearm tightness) threw two scoreless innings against the Padres in his first outing since May 26.

Cardinals: St. Louis will start RHP Jack Flaherty (10-8, 2.96 ERA). He gave up just one run over eight innings in a win over the Cubs on Friday. He threw a season-high 118 pitches.