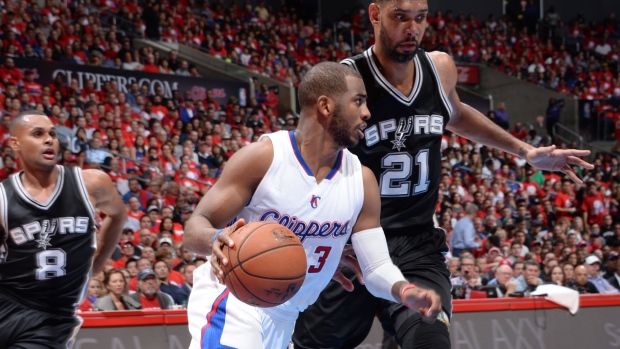 LOS ANGELES, Calif. - Blake Griffin accelerated through the paint and threw down a vicious dunk right on Aron Baynes' head in the third quarter. A few minutes later, Griffin did it again to the same poor San Antonio centre.

After three years of early-round failures, the Los Angeles Clippers are hungry for their first major taste of post-season success. As Griffin proved, they'll jump all over the defending champion Spurs as many times as necessary to advance.

Chris Paul scored 32 points, Griffin added 26 points and 12 rebounds, and the Clippers surged in the second half for a 107-92 victory Sunday night in their first-round series opener.

Jamal Crawford added 17 points as the Clippers stayed comfortably ahead down the stretch, meeting the defending champs' challenge to start off a difficult post-season-opening matchup for two powerful teams.

Paul and Griffin took control in the third quarter with a 24-10 run. Griffin got his roof-raising, back-to-back dunks off pick-and-roll plays, throwing down in vintage Lob City style after avoiding some acrobatic dunks this season to protect his health.

"I just want to be aggressive," Griffin said. "I don't want to settle for anything, because now is not the time to have the mindset of selfpreservation."

Kawhi Leonard scored 18 points for the Spurs, who had won the opening game in their previous 11 playoff series. Tim Duncan had 11 points and 11 rebounds, but the Spurs couldn't rally from their hefty second-half deficit.

"The game was their defence was better than our offence," coach Gregg Popovich said. "Their aggressiveness, their athleticism, their physicality really hurt us offensively. I actually felt decent at halftime ... and then they had that run, but I thought it was their defence."

Tony Parker rolled his ankle early on and managed just 10 points on 4-of-11 shooting for the Spurs, who slipped to the sixth seed in the Western Conference in their season finale. That loss at New Orleans forced them to open their chase of their sixth NBA title against the hungry Clippers, who have never reached a conference final.

Both teams headed into the post-season with enormous momentum: Los Angeles won 14 of its final 15 games to finish with 56 victories and the NBA's third-best record, while San Antonio won 14 of 16 and 11 straight before the season finale.

"We give them a lot of credit, because they sustained it longer than we did," Duncan said. "They played harder longer. They had the energy with their home crowd behind them."

The Clippers anticipate considerably less post-season turmoil than they faced last season, when team owner Donald Sterling was banned from the NBA for life during the club's first-round series against Golden State after his racist remarks were revealed. The Clippers beat the Warriors in seven games after dumping their warmup shirts at centre court in Oakland in a gesture of solidarity against Sterling.

San Antonio began intentionally fouling DeAndre Jordan at midcourt with 1:34 left in the first half, resuming the much-loathed strategy of forcing a 39-per cent free-throw shooter to the line. It had minimal effect, though: Jordan went 4 for 8 in his four trips to close the first half, leaving the Clippers up 49-43.

Baynes and the Clippers' Matt Barnes both sparked their teams when they wrestled for a loose ball in the third quarter. Neither would give up the ball as they tumbled into the cameramen underneath the Spurs' basket, bringing the crowd to its feet. "I liked them both," Rivers said. "Neither one was dirty. They were having a man contest."

The Clippers are the only playoff team among Staples Center's three tenants, and the Kings' ice has been melted and the Lakers' championship banners covered up for their club-record fourth straight post-season appearance. A sellout crowd in red T-shirts batted illuminated balls around the arena before the game and remained standing in the final minutes for a long ovation. "That was amazing," Rivers said. "I thought it was better than the Golden State (seventh) game last year."

Spurs: Tiago Splitter returned to San Antonio's starting lineup for the series opener after missing the last six games with an injured right calf. The Brazilian centre played only 10 minutes and had his calf heavily wrapped on the bench. ... Rivers said the decision to start the series on a low-profile Sunday night television slot showed "disrespect" for the Spurs' five championships. When told of his friend's comments, Popovich dryly replied: "He's trying to trick me somehow."

Clippers: Crawford went 10 for 36 in four games after returning from a lengthy injury absence earlier this month, but went 7 for 10 in the playoff opener. ... Austin Rivers made his NBA playoff debut, scoring two points.